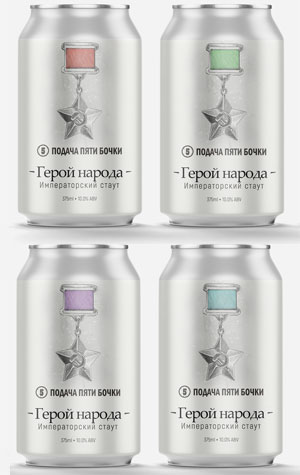 No, you didn't have a stroke – this is a Soviet medal, and the name of the brewery and the names of the beer on these cans are written in Russian. Thus it seemed to me advisable to translate this review into Russian and back using Google Translate.

Five Barrel Brewing are the heroes we need to produce four – no more, no less – imperial stouts by the end of winter. They sell them as a mixed pack of four-packs containing one original imperial stout and three with other ingredients added.

First taxi from the parking lot is original, smooth, malty, with chocolate rolling on the tongue, with enough alcoholic warmth to make you feel comfortable on those long Moscow nights.

Next comes the option with the addition of chocolate and vanilla. This one is a little deeper and darker, tastes like it was cooked at midnight on a full moon. Somehow, chocolate and vanilla also convey a coffee bitterness that pairs well with the higher gravity and sweetness of this option.

Peanut butter and chocolate do not have the distinct peanut butter flavor I would expect, but they do have a zesty† character that is probably related to the crushed legumes. It tastes a little nutty, but overall there is a sweet creamy note and warmth. If there is any great peanut butter, it's the flavor that stays in your mouth after you've finished drinking.

Finally, the chocolate chili option is a delicate matter. Don't be alarmed if you don't usually like chili peppers – they have a rich chocolate flavor with a slight tingle of chili peppers on the lips and in the back of the throat. This heat will not harm Siberian Husky fleas.

†Translation note: This was meant to say savoury; it’s definitely not zesty. Does Russian not have a word for savoury?