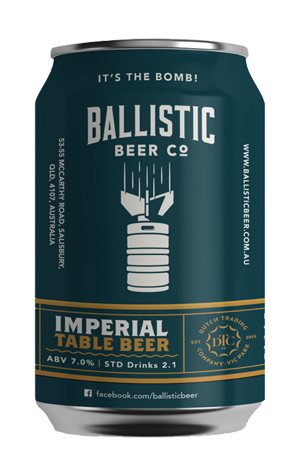 What happens when a top Brisbane brewery and a top Perth venue have a baby?

Ballistic’s head brewer Lachy Crothers grew up in Western Australia and, like most people who moved away from their hometown, he still gets nostalgic for the old country. So it was a treat for Lachy when his mate Joel Beresford made the trip from Perth to Brisbane to brew a beer with him. Joel’s the co-owner and director of The Dutch Trading Co, a 26 tap craft beer venue that won Australia’s Best Beer Venue in the 2018 Beer & Brewer awards. When he and Lachy got together to brew a beer, it was never going to be something "normal". And so the Ballistic x DTC Imperial Table Beer was born

The original concept of a Belgian table beer is a low alcohol beer, often in a jug or large bottle, that you bring to a meal and share around like a bottle of wine. Ballistic’s Imperial Table Beer is an obvious oxymoron, with its alcohol content of 7 percent ABV. But there’s also a second way it doesn’t fit the category of table beer – you may be hesitant to share it with anyone.

The ITB looks like cloudy apple juice, with a rapidly dissipating head. A whiff of freshly cut grass, sticky bananas and floral notes gives you the impression of walking through a banana grove in high summer. While traditional table beers have a gentle nature, that gets thrown out the window with the very first sip, where the beer reveals its willingness to play rough. Saison-esque flavours walk hand in hand with a boozy punch, and the addition of lemon, lime and orange zest add power to the mouthfeel and acidity. The finish brings to mind apple scrumpy – the intense sweetness of overripe apples, tempered by the spiciness and funk of juice that’s just started to turn interesting.