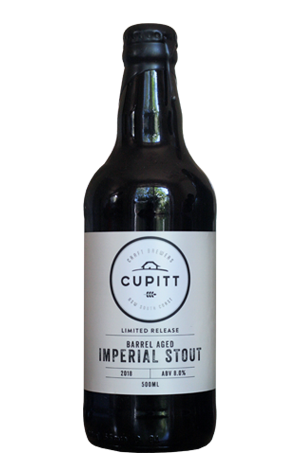 If Cupitt’s 2018 Barrel Aged Imperial Stout proves any one thing it’s that being the biggest and boldest isn’t the be all and end all when it comes to this style of beer.

Conceived in 2017, this spent spent eleven months sitting, dwelling and developing inside old shiraz barrels before being bottled. Once you’ve selected a suitably salubrious occasion to chip your way through the thick (and rather fun) black wax cap, you’ll be met by a beer that shows off satisfying characters of cocoa, leather and liquorice alongside light oak and tannin imparted by the barrels. There’s a touch of raisin sweetness but nothing near the thick saccharine palate attack sometimes delivered by bigger beers of its ilk. The body is as toned as it needs to be without showing a need for any shirt-ripping muscle-flexing displays. It’s rich without being overly robust, full without being fearsome.

The result of this relative restraint is simply a rewarding big beer, one you’re likely to polish off in its half litre serve a little more quickly than you perhaps first intended.