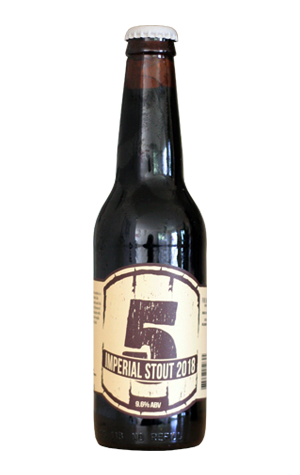 Winter. Some shiver and swear at the mere mention of the word. Others take a more holistic view of the year’s natural divisions and just get on with making the most of whatever weather gets served up. As if you don’t enjoy hunkering down beneath a blanket, rain on the roof, eyes on a film, one hand resting on your lover’s thigh and the other cupping a goblet of some rich, dark beer. Magic. Those that choose to embrace snuggle season in Wollongong will be pleased to know that Five Barrel has released the 2018 version of its ultimate cool weather companion, the annual Imperial Stout.

This is a beer that has spent around four months in red wine barrels before being bottled, with the intent that the barrels will have added extra degree of complexity to sit atop a customary rich coffee and chocolate character, sweetened up by some light notes of stewed or dried fruit. For a big beer this one doesn’t feel so big, just as it still feels quite young despite having had that time in barrel. Indeed, you get the distinct feeling that its best is yet to come. Based on past form this is a beer that will keep getting better for some time yet; at last taste – and according to several other sources, not least the brewer – the 2016 is holding up beautifully. That being the case, the logic seems clear: buy some now, try it today, but be sure to set some aside – winter will be back again next year.