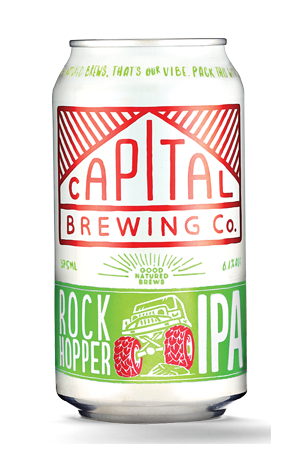 If your head brewer is from San Diego, it’s surely only a matter of time before you brew a West Coast IPA. And so, while Capital Brewing didn’t launch with one in its range, it had always been the plan for head brewer Wade Hurley, who must have brewed such beers hundreds of times while at Green Flash and Coronado Brewing, to do just that. Thus Rock Hopper became one of the first beers brewed at Capital’s brewery in Fyshwick once they got it up and running – and its popularity at the taproom meant it was an easy decision for the brewery to can the beer and send it out into the wider world.

As you’d expect from the style, it’s a very lean beer, with the malt playing a minor role so the four American hops, Citra, Amarillo, Chinook and Centennial, are allowed to shine. And that they do, with a medley of tropical fruit salad flavours from mango to melon all leaping from your glass. While bitterness does make its presence felt – and there’s also a slight hit of pine along the way – it’s very much an IPA of the fruit forward kind.