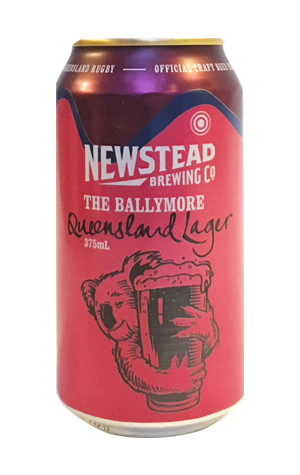 Think of the last time you went to the rugby – or just about any sporting event, for that matter. You went to watch the game, but it’s never just about the game. You wanted to get caught up in the buzz, the atmosphere, the excitement of it all. So you brought your mates, you wore your team colours, you got a pie and some “hot” chips… and you grabbed beer. Your mates were fun, your jersey helped your team score (that’s how it works, right?), the chips were tolerable… and the beer was a bloody let down.

Ballymore Queensland Lager is here to put an end to that. Since Newstead Brewing is now the Official Craft Beer Partner of Queensland Rugby Union, the two have collaborated to create this beer, and they’ve done a fine job. No need to slam this mid-strength down just to numb your taste buds. Smell the tropical fruit (if you can smell it over the sweat of the crowd), taste the light hop presence up front (if the taste of the soggy chips doesn’t overpower it), feel the tingle of the carbonation (if the feeling of pins and needles in your butt isn’t too distracting), and enjoy the gentle bready aftertaste (almost as much as you’re enjoying the players bashing into each other).

With an all Aussie malt bill, all Aussie hops and all Queensland spirit from a brewery that’s actually owned by Queenslanders, Ballymore is the footy beer you actually want to get your hands on.