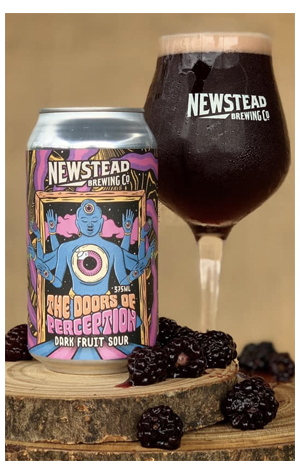 It’s inspiration all the way down, starting with Aldous Huxley’s mind-bending adventures on mescaline that led him to write The Doors of Perception, from which the band The Doors later drew their name, and now, a few decades on, sees Newstead borrowing the title for this dark fruit sour.

Pouring a rich, deep mulberry colour with a slightly pink head, this boysenberry, mulberry and blackcurrant fruit sour has an aroma of jammy berries. Flavour wise it’s packing a big berry punch too, with raspberry, blackberry, red and blackcurrant and mulberry notes all finding their way in there, creating a mix of both fresh and jam like berries. There’s some promised raisin from the malts, plus a citric tang and sourness, with that citric element also bringing a light astringency that gives the beer a drier finish than the flavours might suggest, leaving you with a slightly sweet sourness that doesn’t overwhelm.

In the words of Jim Morrison - and the Newstead team - break on through to the other side.