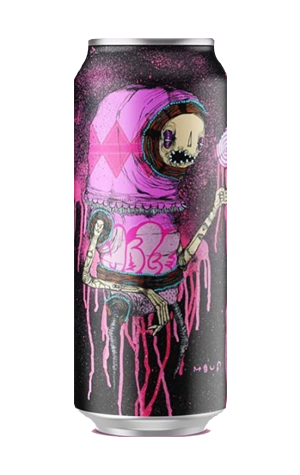 The team at Newstead are passionate about beer and the concept of beer as an art form. As such, extending that passion into a collaborative series in support of art and artists feels like a natural evolution. That evolution draws on inspiration from breweries like Canada's Collective Arts to give us The Art Series, which launched with an art show at Newstead’s Milton brewery before being released into the wild. The first edition is the Sodamouf (The Art Series #1) Soda Ale, brewed in collaboration with local Brisbane artist Soda Mouf, whose design inspired the beer and whose artwork also adorns the can.

Newstead have played it somewhat cool when it comes to what’s in the tin as, much like the viewer does with an artwork, the hope is that the drinker will immerse themselves in the experience and make of the beer what they will. Drawing inspiration from Soda Mouf’s art as well as a "frosty sherbet after work" and the enjoyment of eating a "tingly" piece of fruit, they’ve gone for a hazy, colourful beer with a vibrant aroma and a fizzy feel.

Poured from the can, the beer has an alluring rose tint from the hibiscus and blackberries used in the brew. On the nose there's orange and passionfruit accompanied by some pine. Taking a sip, you find passionfruit and orange that soon become like sherbet, more sweet than tangy, with pleasant pine notes and just a hint of berry. There’s a lovely dose of bitterness that builds and lingers a moment, too, but it’s countered by that slightly sweet sherbet and a dash of tartness, while it all sits together in fairly fizzy carbonation with a light body.

Combined, it makes for a highly intriguing finish and a beer that will leave you pondering - just like a great piece of art.

Look out for a new series, Art For Brews, on The Crafty Pint, as prefaced, in a manner, here