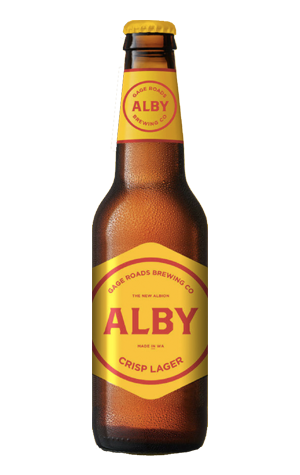 For the brewery that scored the WA beer industry's coup of the decade to supply the 60,000 capacity, $1.6 billion dollar stadium with up to 5,000 kegs during a five-day test match, there's the question: what on earth do you brew for them? Despite winning AIBA Champion Australian Beer 18 months prior for a 6.2 percent ABV New World pale ale, for Gage Roads the reality of sating the broadest range of palates under the strictest of Liquor Licensing guidelines leads less to the trophy-winning Little Dove and more to Alby Crisp Lager. It's the responsible, school pick-up approved (not really, but you get the idea) sibling of Alby Draught: a mass appeal quencher with just enough beer cred to potentially draw the populous into the world of craft beer.

Screwtop stubbies make it clear this beer is intended for instant refreshment, meaning the only chin-stroking is likely to be of the "Should open another one?" variety. It’s a question that, for many, will be answered by the beer's positioning on the cusp of one standard drink and, for others, by the combination of sweet malt base, minimal bitterness and soft carbonation, which results in a slightly fuller mouthfeel than expected.

While Little Dove in the Craypot currently seems unlikely, the halo effect they create could see the Alby twins turn out to be a welcome shot in the arm for WA brewed beer.