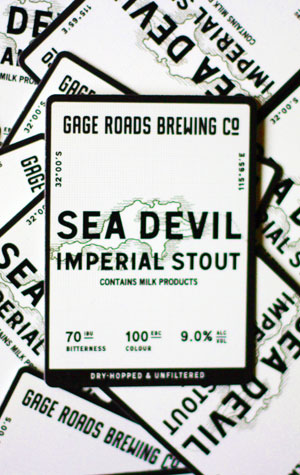 Those who'd been paying attention closely for a while would have noticed something afoot. With Gage Roads' last rebrand of a few years ago came reworked recipes and a couple of new beers, none of which might have set a beer geek's world on fire, but were nonetheless fine examples of their styles, and were augmented by well received limited releases. Yet the surprise that many experienced when the WA brewery was called onstage to collect the 2016 Champion Australian Beer trophy was both palpable and understandable. We doubt that's so much the case now.

While this year's Australian International Beer Awards didn't see any more trophies follow Little Dove into the cabinet, there were more medals, including a gold for the Sea Devil Imperial Stout, a beer you wouldn't have expected from Gage a few years back. Described as ink black with "rich coffee and roasted malt alongside big American hop aroma", a body "typified by caramel, roast coffee and bitter chocolate, with high alcohols adding to the sweetness" plus "big resinous hops and robust-yet-balanced bitterness" it's now doing the rounds on tap.