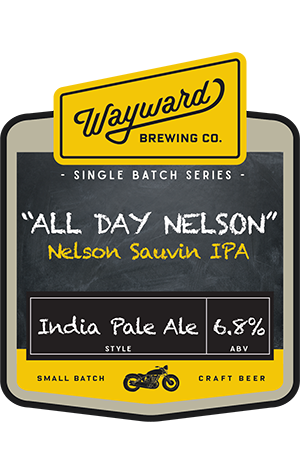 You don’t want to know what the team at Wayward had to do, who they had to do it to, or how many times they had to do it, in order to get just ten kilograms of Nelson Sauvin hops. This is a New Zealand hop which is so popular and limited in its availability that it’s like brewer’s crack, the kind that causes hop-forward brewers to crawl over each other in order secure advance contracts with growers amounting to tens of tonnes of hops a year. Wayward managed to score just ten kilograms, more or less equivalent to the cones that fell off the truck on the way to a real delivery. But a little goes a long, long way.

Their All Day Nelson IPA uses each and every last little fleck of that Nelson Sauvin in its creation – from bittering to whirlpool to dry hopping – to make a beer that’s utterly replete with the gooseberry and white grape characters that make the hop so distinct and well loved. Of course, as with the hop’s namesake wine, Sauvignon Blanc, some people aren't into such explosive flavours and fragrant aromas, instead preferring their IPAs to be in the piney or resinous bracket, but anyone with an open mind, a lust for fruit and love for a bit of dankness ought to be very happy. While All Day Nelson is undoubtedly all about the hops, it’s worth at least a passing mention for the quiet work of the malt which serves up a delicate biscuity, pilsner type character that lets the Sauvin shine.