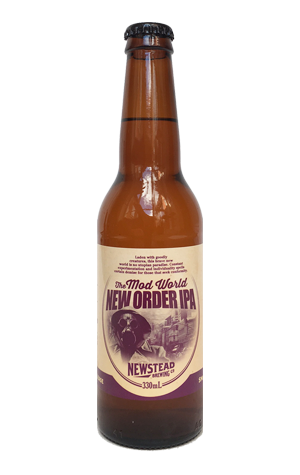 Newstead Brewing already has an IPA in its lineup: the excellent Two to the Valley. It's a relatively delicate, balanced take on the fruity American examples that have driven the style's popularity. If you've tried that beer, then know this: The Mod World one-off brewed with their buddies at KAIJU! is a very different beast indeed.

It's tagged a "New Order IPA" and comes bearing the oils and acids from a collection of punchy hops drawn from Germany, New Zealand and Australia. And it comes bearing lots of them; despite registering a relatively normal-for-an-IPA 6.5 percent ABV, it registers close to 90 International Bitterness Units, the sort of level you might expect in an imperial IPA far stronger. The malt bill is also stripped down to its bare bones, as is instantly apparent from its pale straw colour, meaning there's minimal sweetness to distract from the hops.

Which is a rather circuitous way of saying that this is a damn hoppy beer in which sessionability and balance play second fiddle to assaulting your palate with hop flavour and bitterness. You'll find an array of hop characters in there: gooseberry, tropical fruits, some herbal touches – but mainly it's what the brewer is calling petroleum and what we'd call diesel (tomahto, tomayto). If you like your IPAs floral and fruity, it's probably not for you; if you like to pitch your tongue's receptors into battle, get in before it's gone.

And other good beer stockists across South East Queensland