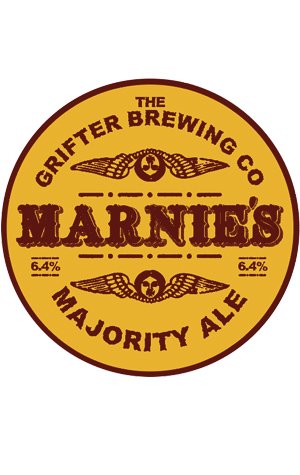 Back in 2013, the Grifter Brewing Company released Marnie’s Majority, a beer named and brewed in celebration of the birth of brewer Glenn Wignall’s first child. And a belter of a beer it was too, gaining quiet but high praise from some of Australia’s foremost brewers of hop driven beers. As was always the plan, the beer was brewed again at the same time in 2014 but last year Marnie didn’t get a birthday beer – what with things in fast motion at the business, culminating in the opening of their fine new Marrickville home. But this year the celebrations are back on, and the beer is back, so happy birthday to us.

Keen observers will note that despite Marnie’s general appearance of being a hopped up US IPA, it’s been labelled simply an an ale. That’s because its really more of a homage and hybrid of the American and English styles than a straight-shooting style of its own. A rich malt base that gives off toffee characters paves way for several judicious hop additions, predominantly Mosaic but also a touch of Bravo, and creates a beer that’s a resinous affair without a bitter sting – in no way will this be a beer to challenge those in pursuit of big IBUs. Stretching the memory back a couple of years to when it was last seen, you might say that Marnie’s has become more rounded over time. Whether or not that’s actually the case, it’s nevertheless a fine and welcome return.