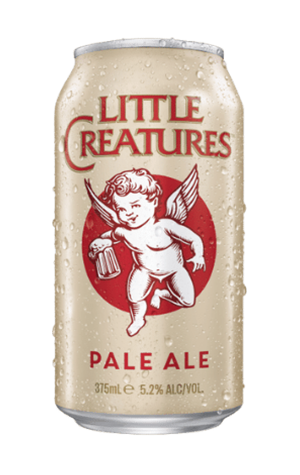 Can anything be said about this beer that hasn't already been said? When it first appeared as Little Creatures "Live" on the day the brewery opened, it shocked even the bar staff who were about to serve it to the public with its punchy interpretation of big, hoppy American style pales. And while many have imitated since, it remains a standout on the Aussie beer scene, if one that's been surpassed in terms of potency by many newer pales on the market.

Possessing everything you would want in the style - aromatic hop aromas, softly layered malts and a satisfyingly lingering bitterness - it's a beer that has done as much to change Aussie palates as much as any. And, while some beers have since gone much bigger and hoppier, we challenge you to sit any craft beer fiend down with one and tell you they don't love it.

As for the facts, it contains a load of whole Chinook and Cascade hop flowers sourced from Washington and Oregon in the US, as well as Tasmania, that are thrown at this beer. These create a citrus and grapefruit aroma and flavour balanced with a careful selection of specialty malts and a local pale malt.