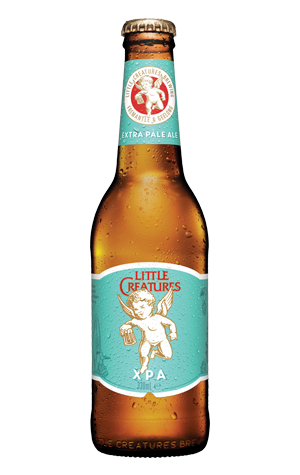 As Little Creatures celebrates its 18th birthday and is thus able to legally buy itself a beer, the pioneering brewery has marked the milestone with a new core range beer. In doing so, it joins the massed ranks of Aussie brewers with an XPA in their lineup.

It's a choice that acknowledges the growing popularity of approachable, lower bitterness beers that still have the hallmarks of Creatures' hoppy heritage, with their XPA tagged as a "drinker not a thinker".

Showing its youth, the beer features a modern dry-hopping blend of Galaxy, Mosaic and Citra hops that imbue XPA with fresh citrus aromas and a touch of passionfruit which continue through to tasting. Bitterness is barely noticeable through the light, fruity sweetness on the palate, while the light malt base’s levity keeps the approachable vibe very much front and centre.

With a debut timed as summer 2018 looms, the only surprise is that XPA hasn’t joined Dog Days in cans, ready for warm days outside. But maybe they're keeping that up their sleeves.

Available from the breweries in Freo and Geelong