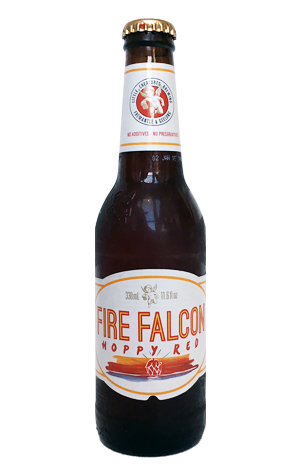 Little Creatures has already brought its much loved Dreadnought back for the colder months. But, given that beer's limited availability (from the two breweries or via Lion's online store only), it's this winter seasonal you're more likely to come across. Fire Falcon is, we're told, inspired by the Freo sunset and puts hop blend Falconer's Flight front and centre. It's a blend of five hop varieties from the Pacific Northwest created in honour of an iconic figure from that region's beer industry and designed for the punchy pales and IPAs that have become so central to craft beer's rise in the past decade and more.

That said, from our experience, brewers seem to prefer using the blend in red ales (at least in Australia) and that's what the Creatures team has done here. So, while you're still met with the familiar citrus and pine aromas of classic American IPAs and pale ales, the malts lending the beer its ruddy orange colour contribute more caramel sweetness and some nuttiness too. It's all delivered with typical Creatures balance, with a touch of grassiness to taste and a well judged bitterness too. If we were to relate it to any other beer from their lineup, it's like a hopped up Rogers on steroids.