The Sunshine Coast’s Brouhaha Brewery has a major expansion in the works, with the team announcing plans to open a new production brewery at the Aura Business Park at Bells Creek by the end of the year. The new site will allow Brouhaha to quadruple their production and is located close half an hour’s drive east from their hinterland home in the small town of Maleny.

Matt Jancauskas (pictured below), who co-founded the brewery in 2016, says the new 35-hectolitre system has been custom-designed to help them brew sours – well, one sour – in particular.

“Our biggest-selling beer by far and the one we just can’t keep up with is Strawberry & Rhubarb Sour,” he says.

Matt says the popularity of that beer puts a real strain on their current 12-hectolitre system, with the beer continually taking up kettle space. The new brewhouse from America's Alpha Brewing Operations, supplied by FB*PROPAK, is a three-vessel system made up of a mash-lauter tun, kettle and whirlpool but, separate to those, is a combined kettle and whirlpool able to focus on large batches of the Strawberry & Rhubarb and other sours.

“We kettle sour [Strawberry & Rhubarb Sour] using Maleny Dairies' natural yogurt and that takes a couple of days in the kettle to sour,” Matt says.

“Our issue with our current brewhouse is we brew a batch of it, put it into the kettle, pitch the yoghurt and then we have to leave it and we can’t use that brewhouse for a couple of days. So that really ties us up and because it takes 48 hours in the kettle to sour, we can’t ever double batch it.”

Brouhaha’s beers – particularly that sour – can be a rare sight anywhere outside of South East Queensland, with Matt saying they’ve had to limit supply to venues and bottleshops in their own surroundings. Currently, they brew close to a quarter of a million litres of beer a year and the new brewery will allow them to reach nearer to a million litres once it's operational – with space to quadruple that again.

Matt says Maleny is effectively bursting at the seams and keeping up with their core range beers has meant they’ve been unable to work on new recipes in the same way they once did. In their first year, they brewed something like 40 separate beers but their ability to experiment been hampered as they've grown.

“It’s turned what was really meant to be a brewpub into a small production brewery,” Matt says.

“This is going to free Maleny up for what it always was meant to be, which was R&D and experimental brewing”

The fact the new Brouhaha is a production site first and foremost means it will be a fairly different offering to the brewery’s home in the Sunshine Coast Hinterland. Matt says, while the new venue will retain a similar vibe to Maleny, it won’t champion local produce to quite the same degree.

“We’re going to have a really great double-storey taproom that looks out over the whole brewery and it will be awesome, but we’re not having a kitchen on that site,” he says. “It will be a taproom and then we’ll utilise food trucks and other local food suppliers."

The application for the new Brouhaha has been made under the Queensland government’s artisan producer licence, which was legislated in March and is a product of the state’s craft brewing strategy. Matt says the new licence is perfectly suited to what they want to do with the new brewery as it allows them to sell their own beer, plus drinks from other artisan producers like wineries or distilleries, and doesn’t require them to serve food.

At Maleny, their brewpub operates under two separate licences, with a distinct zone for their producer and wholesale licenses, which they use to sell takeaway beer, and a separate restaurant licence, which lets them sell wine or other drinks alongside their beer but nothing to takeaway.

“It couldn’t be more perfectly suited for what we are going to do and want to do at the Aura site,” Matt says.

The new brewery won’t just offer more production capacity but a far larger audience of potential craft beer drinkers too, with Matt saying Aura Park's surrounds are seeing close to a hundred homes completed each week in what's comfortably one of the fastest-growing areas in Queensland.

“There are a lot of young families down there and it’s a really desirable place to live,” he says.

“Maleny has been fiercely loyal to us and incredible. But it’s poorly serviced by public transport and Maleny and all the small towns around it add up to a population of less than 5,000 people.”

The new location is also beside the Bruce Highway, one of Queensland’s busiest roads, and it brings Brouhaha much closer to some of the region's other indie brewers. That includes Moffat Beach Brewing, which opened their production brewery in nearby Caloundra West late last year, and Your Mates who have their own expansion plans in the works.

“We’re still a really tight-knit group up here who catch up a lot,” Matt says of the Sunshine Coast considerable number of brewers.

“To have Moffat Beach and Your Mates within ten minutes or so of the new site is just going to be great. It’s also conveniently located right between Maleny and home for me.”

The new Brouhaha is due to be completed in September, with its opening planned for November. Once open, you'll be able to find it and hundreds of other brewery locations through our free Crafty Pint app.

Who Brews Heads of Noosa Beers?

When they worked the stock market, they enjoyed craft beers at the end of the day. So, a few years back, brothers Lance and Craig Masterton decided to embark on a brewing adventure of their own, with Heads of Noosa opening in early 2019. read on Blackflag Brewing's production brewery and taproom in Coolum Beach is a big step up from their Mooloolaba alleyway venue, with space and demand to expand almost immediately. We got in touch as it opens to the public. read on 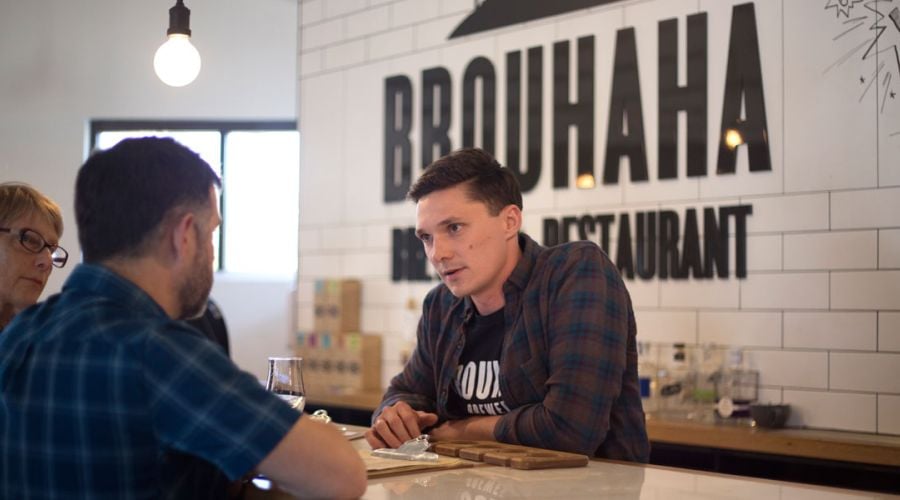 Serendipity on the Sunshine Coast

We meet the man heading up Brouhaha on the Sunshine Coast, a man who sent off a job application from Hong Kong airport in hope and ended up overseeing the expansion of London's Beavertown Brewery. read on