Newcastle has long counted itself as a beer city. But it's only over the past decade that it's come into its own as a craft beer city. And the drinkers counting their blessings at this change owe a fair debt of gratitude to Corey Crooks.

These days, you'll find him at The Grain Store, the beer-centric venue he opened with wife Kristy and which has made a habit of collecting accolades since they first swung open the doors of the 19th century grain store built by J T Toohey. But his involvement in the local booze and hospo scene stretches back much further.

He grew up in a family of publicans and was running his first hotel by the age of 23 before a move to Sydney saw him spend time at the likes of the Captain Cook Hotel and Bondi Icebergs (we never said he was always involved in good beer...). Once life in the Bondi bubble started to lose its appeal, he returned to Newcastle, running bars at the city's uni before switching to repping, both in spirits and beer.

At that stage, although Murray's was brewing some of the country's finest and most innovative beers around an hour outside the city and the Hunter Beer Co was picking up the odd Australian International Beer Awards trophy, the Newcastle beer-drinking public's palate was pretty limited. As much as anything, this was because there wasn't much else on offer, unless you were part of – or mates with someone in – the city's vibrant homebrewing scene.

But, in an unlikely spot – the Albion Hotel a couple of kilometres from the CBD – things were soon to change. Corey started running the corner pub after it was taken over by a group of new owners, decided it was time to bring craft beer to Newcastle and went hell for leather, making its tap lineup one of the best in the country and amassing a bottle list to outdo many specialist bottleshops.

"It was a risk and ridiculous what we did at the Albion," he says.

Yet he knew what was coming and confident it would succeed. He launched Newcastle Craft Beer Week soon after, initially pretty much entirely held at the Albion before spreading across the city; he even persuaded the local Mini dealership to deck out one of their cars as The Crafty Beer Bus so he could chauffeur people around.

When putting together this entry in the Advent Calendar series, I noticed among the logos for the festival and the sponsors on the Beer Bus a CBIA (Craft Beer Industry Association) sticker. And it's this, as much as a passion for great beer and building a beer community, that has defined the Crooks' success: after a couple of false starts that led to Corey working shifts on the Murray's bottling line and picking grapes to make ends meet, the couple secured a lease on what would become The Grain Store – a space they'd had their sights on for some time – and set about creating a beer venue that would pour nothing but independent Australian craft beer through its 21 taps.

Other than tapping the occasional import when the occasion suits – past July 4 events, for example – it's been that way ever since 2013. In a conversation about the Balter rumours a good ten days or more before they were confirmed, he told me he'd already worded their rep up that he'd have to come and collect any untapped kegs as soon as any deal was done.

Along the way, he's thrown dozens of sold out brewery degustations that the brewers – let alone the punters – rave about, and watched as more and more venues have started turning over more taps to good local beer while the number of breweries in the region has grown in tandem. He picked up the inaugural Indies True Indie Supporter in September of this year. And he's watched, delighted, as tastes have changed too, citing the example of their annual IPA Day when they pour nothing but 21 different IPAs from independent Australian brewers.

"We used to muck around with [Murray's] Icon 2IPA at the Albion and scare the shit out of people," he recalls. "Now six to seven percent IPA is the go to beer." 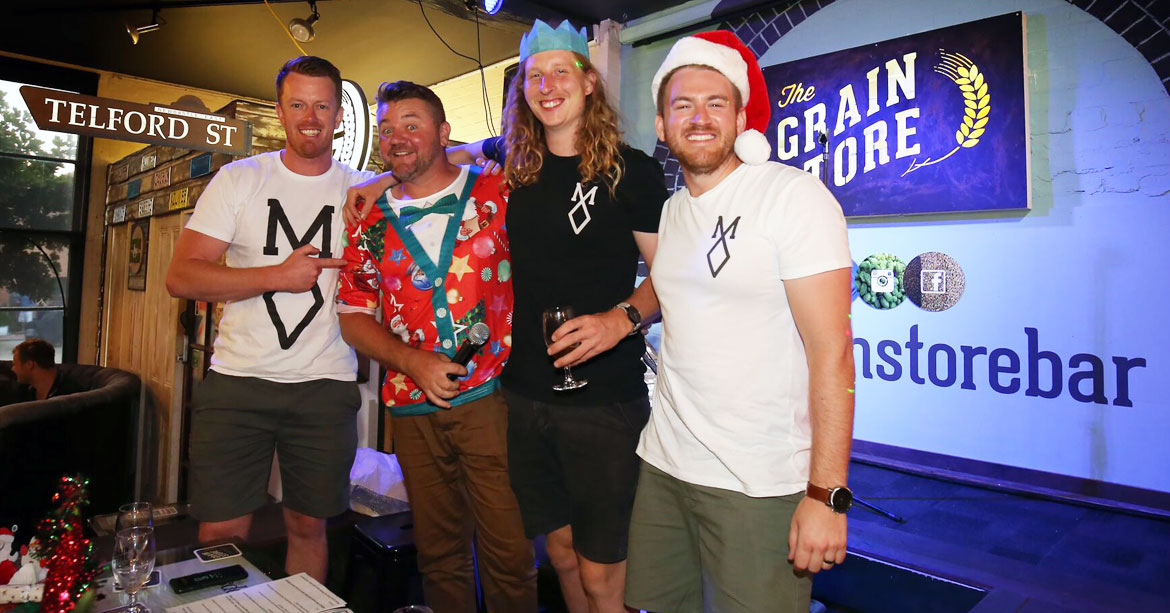 Corey (second from left) getting into the festive spirit with the Modus Operandi crew.

A couple of things stand out for me... Mainly being the outstanding quality and consistency we now find in our glass from our local brewers and the switch from most of our on-premise venues to now pouring local as opposed to the imported craft we found flooding our taps ten years back.

The amount of direct and indirect employment the sector has created is nothing short of outstanding.

But, obviously, my main personal highlight was when my wife Kristy and I opened the door to The Grain Store.

The sale of some of the breweries who sold, not all but definitely some, did get me off guard – more the timing.

That we have got to over 600 breweries so fast, when you think at the start of the decade we had so few in comparison.

And the availability of indie beer today – especially here in my hometown of Newcastle. We basically have 100 percent coverage in the on-premise sector.

To state the absolute obvious – healthier than we have ever witnessed in our lifetime, possibly my only downside is that the market is a little oversaturated.

If we are going to continue along the same trend of a new brewery opening every week, hard work needs to be done on the ground by these new players to open new doors to taps and fridges not previously ranging indie beer. The flipside to that is if new brewery X is to open purely via the brewpub model and not enter into the wholesale game then bring it on – let's get another 1600 open this decade.

That we see indie beer get up towards the high teens or even 20 percent market share, something I feel is an achievable goal.

Personally, the possible involvement of my boys, Cooper and Koby, into the industry that I am extremely passionate about.

That good beer gets the respect it deserves in all on-premise venues, much the same as curating a good wine list does. The world is a much better place surrounded by good people and, as we say, "good people drink good beer"!

We're opening a door on Crafty's Advent Calendar every morning up until Christmas Day and you'll be able to find them all here. And you can check out our recent guide to Newcastle's best beer venues here. Last month, we kicked off a new regular feature on The Crafty Pint: Craft Beer Heroes. It is designed to celebrate the people who have done and are doing great things in the world of beer in Australia… read on There was a time when Tooheys was pretty much all you could hope for in Newcastle, but today venues such as the Grain Store are bring craft beer to the people. For our Behind Bars series, the venue's manager Nick Pogonoski tells us where tastes are at in Newy. read on