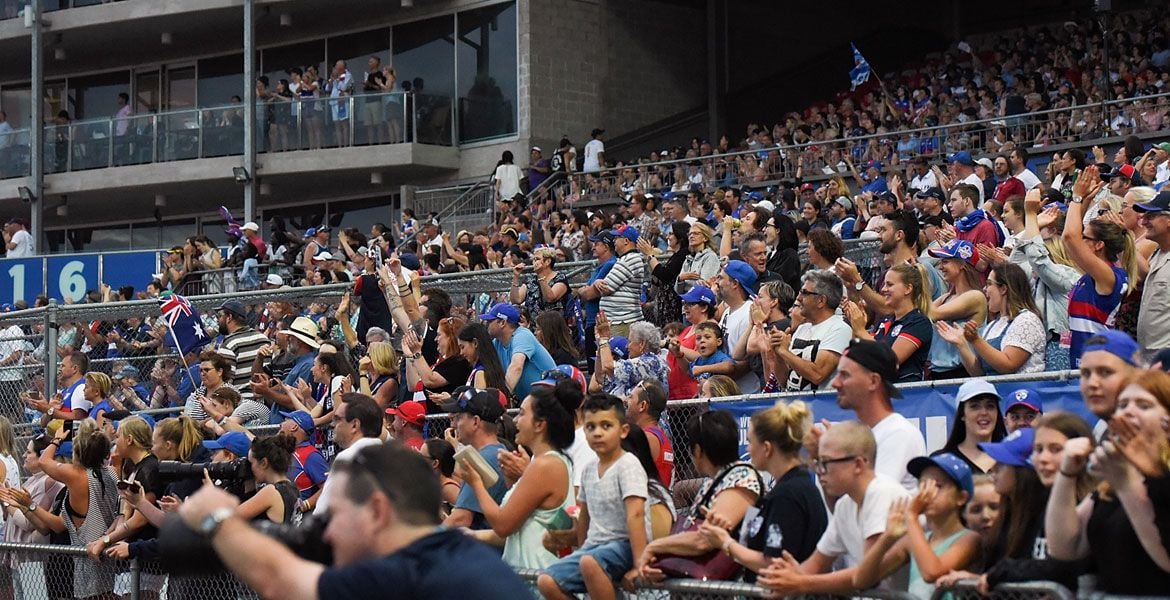 It’s something of a truism in Australia that if you want to watch top level sport up close you won’t be drinking craft beer. Sponsorship agreements, licensing restrictions and the somewhat conservative nature of professional codes seem to have held craft beer’s steady rise at bay.

Yet there are signs that things could be changing. Back in April, news of Colonial Brewing Co’s partnership with Essendon Football Club was met with excitement by many as the brewer became the club's official beer and cider partner for the rest of the 2017. In March, BentSpoke Brewing Co announced its beers would be appearing in one of the bars at Canberra’s GIO Stadium, while the tender for beer and cider at Perth’s forthcoming stadium includes a request for craft options.

These may be some way off Garage Project securing pouring rights for Wellington Phoenix games at the Westpac Stadium, at which they share the taps with other independent brewing companies. Yet, add in former Melbourne Football Club captain David “Neita” Neitz’s entry into the craft beer industry with the MND battling Brewmanity, and there would appear to be momentum at least.

The Colonial deal means the brewery’s brand now appears on Essendon signage for all home games, while they’re working to turn the Port Melbourne brewery venue into the club’s new home for away games.

“I think it’s not just great for just Colonial but independent beer itself,” says the brewery's head of marketing and communications Jenna Godley. “It’s a really important sign the education of consumers is growing.”

The brewery, which launched in WA in 2004 before opening a second, larger brewery in Melbourne last year, has been working for some time to get its beer in the hands of footy-going crowds. Fans who watched last year’s Grand Final at Footscray’s Whitten Oval would have cheered the Western Bulldogs with Colonial cans in their hands – provided they arrived early enough, that is, as the cans were drained by halftime. Subsequently, Colonial beers were served at every Doggies game in the inaugural season of AFL Women’s (AFLW).

Until recently, any small brewery’s dreams of partnering with AFL clubs was out of reach thanks to CUB’s sponsorship deal with the sport's governing body. When that level of sponsorship was reduced last year, it allowed AFL clubs to negotiate their own deals with individual breweries.

“It’s opened up the opportunity for smaller players to get into AFL clubs and we don’t know how long that’s going to be for,” says Jenna, who got to know some of the players when the club held its start of season function at Port Melbourne.

“We thought this would be a really good opportunity to be the first craft brewery to support an AFL club, so we took it.”

Helping break down the barriers is Essendon ruckman Tom Bellchambers (above left with Bombers teammate Michael Hurley), who was hired by the brewery as a brand ambassador shortly before the Colonial partnership was announced. It was Tom who organised the pre-season function at the brewery.

“I’ve had a love for [craft beer] for a couple of years now,” says Tom. “Obviously, last year I missed a lot of football so I was able to do a bit of travel overseas and discovered more about craft beer while over there.

“I’m 27 now and have a lot of spare time outside of football. For me this was a chance to put my time into something that is a real passion of mine and it really makes sense for me at the moment.

“And footy doesn’t last forever so I have to start looking at things outside of football and I thought this was a good fit for me.”

Away from the upper echelons of the sport, the connections are more ingrained. At the community levels of the game, smaller breweries have been embraced longer.

One example is the Reclink Community Cup, an annual event that has a strong claim to be the most community minded sporting (in the loosest sense) fixture in the country.

For more than two decades in Melbourne, it has pitted local musicians against community radio presenters to raise money for some of Australia’s most disadvantaged people. In 2012, the cup was expanded to include an event in Sydney and has since gone on to feature in all state capitals.

Mountain Goat’s tent would always attract one of the largest crowds in their days as a sponsor in Melbourne, while the Wheaty Brewing Corps got on board with the media team in Adelaide last year. And, since the early days of the Cup’s expansion into Sydney, Young Henrys has been involved as a sponsor, attracted by the event’s unique mix of football, independent music and laid-back atmosphere.

Andy Miller, who bears the incredibly Young Henrys title of Brand Master Flash, says: “Our involvement in the cup really makes perfect sense. It’s a really amazing cultural and brand fit for us.

“I think the kind of people that come to the Community Cup are looking for a meaningful contribution and want the people involved [with the Cup] to share the values.

“I was down there pouring behind the bars in Melbourne last year and it was one of the best events I’ve been to. Everyone’s just so stoked to be there and there is just a great mix of people.”

Update: Since publishing the article we've been contacted by Hawkers Beer who tell us...

They have made inroads with in the VFL, with Hawker Pilsner the only draught beer poured at Northern Blues home games after they became beer sponsor two years ago. The next home game sees all CUB cans being removed from the fridge and temporary bars installed, pouring Hawkers Pilsner and Pale. And, for this year's Reclink Cup game in Adelaide, the two teams are sponsored by Hawkers and Pirate Life. Due to naming rights, Coopers beers will pour at the stadium but attendees at all training sessions, launch party and after party are going to be enjoying Hawkers and Pirate Life.

Before those of us dreaming of asking for the mid-strength option at the Boxing Day Test and being presented with a Miss Pinky get ahead of ourselves, however, it’s worth remembering that Neita, who has a bar in the members stand at the MCG named after him, is under no illusion that CUB’s fingers will be prised from the prized taps there any time soon. And, if the industry rumour mill is to be believed, the quashing of a winning tender bid by an independent Australian brewery to pour at one of the country’s iconic stadia following pressure from a far larger operation would be further evidence that craft brewers’ efforts may well be akin to Queensland sending a team of under-nines onto the pitch at the ANZ Stadium tomorrow in an attempt to square the State of Origin series.

Yet, given Australia’s shared passions for beer and sport – not to mention a love for the underdog – there’s always hope. For inspiration, perhaps we need look no further than the lineup of sporting stars dunked into icy water as part of the Big Freeze fundraiser that took place before this year's Queen’s Birthday clash between Melbourne and Collingwood at the MCG: craft beer just needs its Stephen Bradbury moment.

This year's Community Cup series kicks off at Victoria Park in Collingwood on June 25.