Crowd-funding has been increasing in popularity in the beer world, both here and abroad. People have used it for all manner of reasons, some more successfully than others. And in the "successfully" column sits Valhalla Brewing.

Launched by longterm homebrewer Scott Hunt and his family early in 2016, the initial aim of holding out the metaphorical cap in hand was to help fund his first brew. Once the $5,000 was successfully raised, he brewed Obsidian, a ballsy, hoppy black ale at Red Duck. This beer has since been brewed again while a second round of crowd-funding is underway to get a follow up beer, the Aragon IPA, off the ground.

Beyond that, the family has grand plans for the Surf Coast region of Victoria they now call home, as Scott explains in our latest Who Brews...? feature.

Scott Hunt: Prior to starting Valhalla, I was a home brewer for 25 years and, along with my wife Ange, a small business owner for 20 years.

Born and bred in Bendigo, I have lived in Torquay with my wife and daughter for the past seven years. My wife and I have previously owned a hair dressing salon in Bendigo, a design and marketing studio in Perth, and currently own and operate a real estate business in Torquay and Geelong. We started Valhalla Brewing this year in order to indulge my passion for brewing and our love of quality craft beer.

Ange provides invaluable creative input, encouragement, and moral support. And, of course, she is my second harshest critic to ensure we are only releasing great beers. I am my first harshest critic!

Being a family business, our daughter Trinity is, of course, also involved. She supports what we are doing and loves seeing her dad follow his dreams. It is important to inspire our kids by showing them that anything we set our minds to is possible.

Why did you decide to go down the route you have with your beers?

SH: To launch our first commercial beer, we decided to go down the path of crowd-funding. We successfully raised $5,000 to brew the beer, rent some kegs and create some merchandise. While it was definitely helpful to the cash flow, the main reason we did this was to get a group of people involved that were instantly engaged with our brand and our beer.

From our first campaign, we have 45 core supporters who have a small sense of ownership or involvement with Valhalla and Obsidian. For this reason, we decided to also kick off the launch of our Aragon IPA with a crowd-funding campaign.

SH: We are based in Torquay and I brew my test batches here. I have just set up a 100 litre test batch system within an arts hub precinct in Torquay. It is a small step up from my 30 litre test system in the back shed at home!

To date, our commercial batches have been gypsy brewed at Red Duck in Ballarat. Scott and Ryan at Red Duck have been great to work with and have made sure the quality of the beer is as high as I expect it to be.

SH: Because I love great handcrafted beer. And I love creating something that people (including myself) love to drink. To be able to create something that people drink and then go out of their way to phone or email you, or come up to you personally and tell you how much they love the beer you have created, is a wonderful thing.

SH: The first batch of our Obsidian Black Ale (6.8 percent ABV, 55 IBU Black IPA) was released in May this year. Our second batch of Obsidian is out now.

Our second core beer will be the Aragon IPA (6.3 percent ABV, 60 IBU). It is due for release in September.

We have recipes in waiting for a Red Session IPA, an Aussie hopped pale ale, a Australian blonde ale, and an Oatmeal Stout. Super keen to get these out into the market but one step at a time…

SH: At university I studied ancient history and mythology and was always fascinated by Greek and Norse myth. When we were looking for a brewery name, we wanted something that was a bit mystical and in some way reflected our belief that great beer is a conduit to people getting together to share a story or a laugh or just a good time in general. Valhalla was the great hall of Odin where Viking warriors would go after they died to feast and drink and retell stories of battle glory. We reckoned this was the perfect name for our brewery.

All our beers are named to reflect those things we love and think make life wonderful: art, music, literature, travel and so on.

Was there a moment or beer that set you on the path to becoming a brewer?

SH: I don’t think there is one defining moment. Over the years, my interest in quality handcrafted craft beer has grown and I have had many conversations over the past couple of years which have all added up to my decision to start a brewery.

My love of beer and homebrewing, combined with my passion and experience in small business, made it a no-brainer in the end. I’d been researching the various business models of breweries for some time and in the end the gypsy brewing model really fitted my situation as it allowed me to continue to do my “day job” while establishing a presence in the craft beer marketplace until the day when we can build our own brewery.

If there was a specific moment that made the light bulb go on, it was a talk that Jamie from Barrabool Hills (Cockies) Brewing gave at the Odyssey Tavern one night about how he got started. His story really resonated with me and seemed to align with my own situation so it inspired me to take the plunge.

SH: Ha ha – bad timing as there is not much there! A couple of bottles of Obsidian, and a new IPA and Irish Stout from Red Duck that I was given to try. I think there might be a few stubbies of Furphy and Coopers Green out in the back fridge leftover from a party a few months back. I sometimes dig a couple of these out to wet the throat after a game of basketball.

SH: Apart from Obsidian Black Ale? It would have to be Blackman Brewery’s Reginald IPA. It’s a shit hot beer and if it was the only beer I could have for the rest of my life I would be content.

We are so lucky to be able to pop down to Blackman’s here in Torquay and drink our favourite (non Valhalla) beer fresh from the source. My wife and I pop in a couple of times a week for a pint!

SH: Black Sabbath for sure. I would be Ozzie getting up to all sorts of mischief!

SH: We will be running our own brewhouse and taproom on the Surf Coast with a core range of around six beers plus seasonals. Our core beers will be distributed nationally. We will be recognised as a leader in producing outstanding handcrafted beer.

We have no interest in taking over the world or becoming one of the biggest craft brewers in Australia, we just want to consistently produce outstanding beer that people love drinking and have a space where punters can come and soak up a great vibe and drink our beers.

SH: Pretty limited release at the moment, but in Geelong our Obsidian will be on tap at the Odyssey Tavern and in bottles at Corks Crew Cellars in Torquay, Chas Cole Cellars and Bottles and Barrels in Geelong.

In Bendigo, on tap at Handle Bar and Golden Vine Hotel and in bottles at the Farmers Arms Hotel.

The Melbourne market is still a work in progress but hoping to get it back on tap at the Palace Hotel in South Melbourne and one or two other venues.

Boozebud will be stocking our beers online so people can get hold of them wherever they are. The Find Us map on our website shows all the locations our beer is available at the moment.

Thanks, Scott, and good luck with beer number two and the grand plans for the future. You can find out more about Valhalla here.

Previous Who Brews...? features on young Aussie brewing companies can be found here.

NB Our policy is not to write about crowd-funding projects until they have been successful as there are so many we'd be publishing little else. So, if you're planning to run a campaign, please don't get in touch until you've hit your target and are up and running. 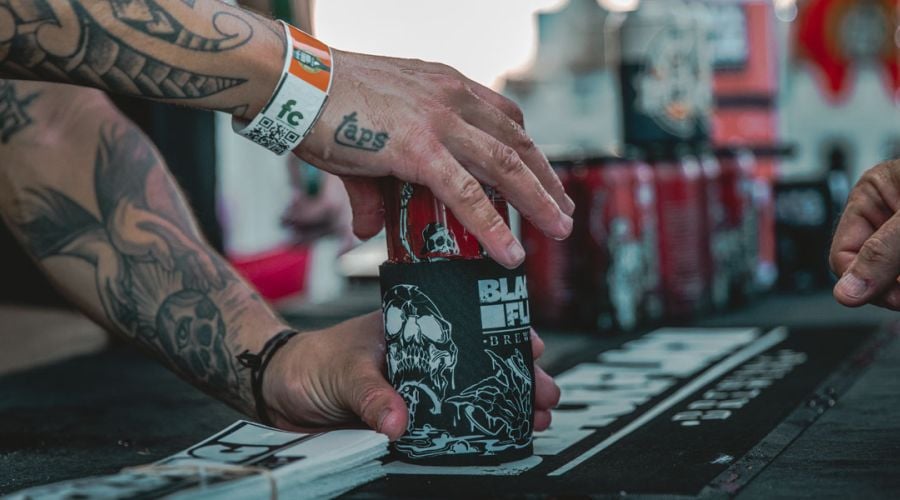 Before Paul Holgate sat down to chat about the sizeable expansion his brewery is undertaking, he said something to Kerry McBride that was immediately apparent on entering the new space. “It’s bloody big, isn’t it?” He wasn’t lying. read on