While most contemporary brewers seem to be chasing new hops, playing with barrels, exploring higher and higher (or lower and lower) ABV beers or seeking out new ways to stamp their mark on the beer world, in Central Victoria there's a brewer keeping at least one foot planted firmly in the past.

Michael "Wolfey" Wolfe is the main man behind Castlemaine Brewing Company – based in Castlemaine, of course – and is developing "legacy beers" that are as reminiscent of Australia's brewing past as his company's famous name. To date, Castlemaine Brewing has a couple of beers out; they're brewed on Brookes' gear in Bendigo for now as a brewery and venue is built in the town itself.

He hopes to have the venue open and pumping by March next year. In the meantime, here's Wolfey (pictured below) to tell us all about his beers, his inspirational forefathers and his desire to pay tribute to brewing's past as he steps up from home brewer to the commercial world.

Where do you brew?
One of the big challenges for a homebrewer is taking the step up to commercial scale brewing, both in quantity and quality. I’ve been lucky enough to spend the last eight months working at Brookes Beer in Bendigo with Doug Brooke and Melissa Church.

Not only has Doug let me hang around asking stupid questions, he’s given me the chance to brew on a larger scale and still tweak our recipes along the way.

Why do you brew?
For me, making beer triggers all sorts of powerful memories: of family BBQs, of sipping the froth off my Dad’s beer, of watching Dad and Uncle Bill making homebrew and seeing them blow up the shed they stored it in when a batch of ginger beer got a little feisty.

Dad always said this taught them to steer clear of anything "a bit iffy". A bit of laconic understatement from the old boy. 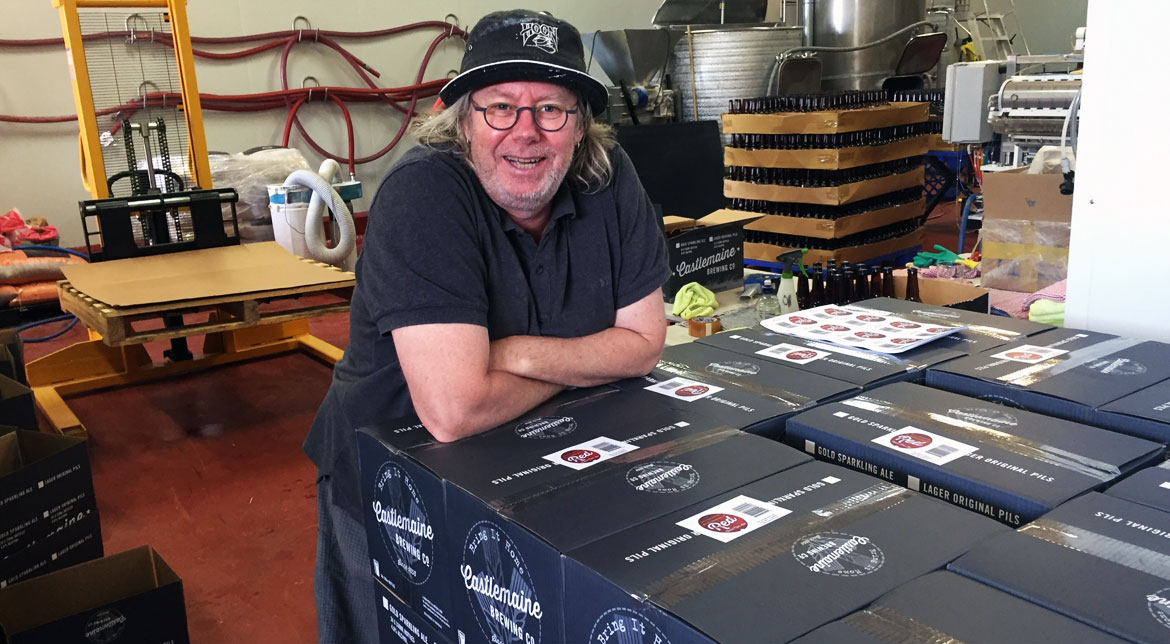 Was there a beer or a moment that set you on the path to becoming a brewer?
Making Castlemaine Gold Sparkling Ale has given me the chance to brew a legacy beer which honours the past, while still pursuing innovation, taste and quality. Recently, we introduced Pride of Ringwood hops to Gold giving it a hit of classic Aussie bitterness, and Willlamette to make it more aroma driven.

It’s misty eyed nostalgia for those 1970s beers with a modern twist. I drink it and think, 'How’s the serenity!'

What beers have you released to date?
The biggest surprise for me has been how enthusiastically people have embraced our Celtic Red Ale, which we released in August of this year. Again, it was really important that we linked our beer to the history of Castlemaine, and particularly my family’s connection to the district.

Peter Wolfe arrived in Chewton in 1856 having arrived from Ireland in late 1855. The gold rush was in full swing and I understand Peter, a copper, was a fair bloke with a taste for sly grogging.

Where can people find your beers?
We’re really well distributed throughout Central Victoria – with a special shout out to The Railway Hotel and Maddern’s IGA in Castlemaine, The Rifle Brigade and Golden Square Hotels and Strath IGA in Bendigo.

We're also found in Kyneton, Ballarat, Woodend, Gisborne, Daylesford, Shep, Tatura and Heathcote. We’ve just hooked up with Trent from Hemlock Distribution in Melbourne to join his stable, which includes Blue Elephant, BrewCult, Brookes and Wolf in the Willows (my personal fave for obvious reasons). Fingers crossed we’ll be making some more inroads into the Melbourne market.

We’re currently building our brewery and taproom at the Old Woollen Mill in Castlemaine. We are the proud owners of a cool room, a large hole and an expensive drainage system. Not withstanding cock ups and delays, our brewhouse will be installed early 2016 and we’ll be open in March.

The Mill site is shaping up to be an exciting development for the district with Coffee Basics coffee roasters, Das Kaffeehaus – a Viennese café, Boomtown winemakers, an ice creamery, bakery, a makers' market and quite a range of artisans from metal smiths to furniture makers like Hugh Makin. The repurposed industrial site really suits our ethos: make it well, make it accessible, make it interesting and engaging.

Castlemaine is a great place to live: a thriving arts community, sustainable manufacturing and a steady stream of blow ins and tree changers to keep the schools full and the shops busy.

Mostly though, Castlemaine is known for two things: gold and beer. We haven’t had to look any further than celebrating our heritage while building an artisan business for the future.

What beers are in your fridge right now?
It will come as no surprise when I say I’m quite partial to my own beers and, having knocked around with Doug Brooke a fair bit, I really enjoy his APA – light straw colour but with a big kick of Citra that’s really well balanced, refreshing and sessionable.

Which beers are found in your fridge most frequently?
We’ve been developing a lager for release in November this year and the pilot batches we’ve been making have been really satisfying. We want to make a Pils that’s true to the style with a little surprise.

I really like Holgate’s Pils so was keen to brew a lager that was clean and fresh with a twist. We reckon we’ve nailed it using Riwawa and Motueka hops bred from Saaz in NZ. I’m loving it!

Thanks, Wolfey. You can keep tabs with his progress via Facebook. Who Brews In Kalbarri?

The Finlay's name has an association with the WA coastal town of Kalbarri stretching back decades. These days, it's attached to a family-friendly brewery serving beers inspired by the region and a seafood driven menu. read on

He may not be a "bird", but Two Birds head brewer Wilson Hede has certainly played an important part in helping the Spotswood brewery stretch its wings. Here, he shares his brewing tips and insights as part of our Brew & A series. read on As they complete their four-day, four-venue launch party, we caught up with the best mates behind Brisbane's Working Title Brewing Co for our Who Brews...? series. read on