This weekend will see the throwing open of a robe in South Australia. But there will be no need to avert your eyes, especially if you're on the search for new and unusual beer experiences. Sunday sees South Australia's newest microbrewery open its doors, as Robe Town Brewery welcomes guests to view its unique setup for the first time.

A four hour drive from Adelaide, Robe itself was discovered in 1802 and named by Governor Robe. The original Robe Town Brewery first began operating several decades later in the 1860s. It was owned by George Lord Senior but little is now known about the old brewery and why it went out of business, although according to The Breweries of Australia it may have only brewed beer for a year.

The new Robe Town Brewery is owned and operated by husband and wife team, Maris and Kristi Biezaite. They started brewing in late 2013, initially as gypsy brewers via Red Duck in Ballarat and the Adelaide TAFE brewery before they funnelled the profits into establishing their own kit. As of May 2015, the brewery was fully commissioned and had commenced brewing out of a disused fish factory in the heart of Robe.

A home brewer with eight years under his belt, Maris always enjoyed making things from scratch, be it bread or a piece of furniture. While living in Latvia and working as a journalist, he wondered if it was possible to make his own beer, which led him into home brewing. That passion grew over the years to the point he and his wife (pictured above right) made the decision to create their own beer label.

And, from a historical name to historical brewing methods, Robe Town Brewery is in keeping with old brewing traditions and methods.

“Some of the historical brewing methods being used at the small batch brewery in Robe today would have undoubtedly been used at the original Robe Town Brewery,” says Maris (pictured below with paddle), who has built his brewery entirely from second hand, up-cycled equipment: oak wine barrel mash tuns: wood fired copper kettle; straw and hay filtration; and open fermenters. 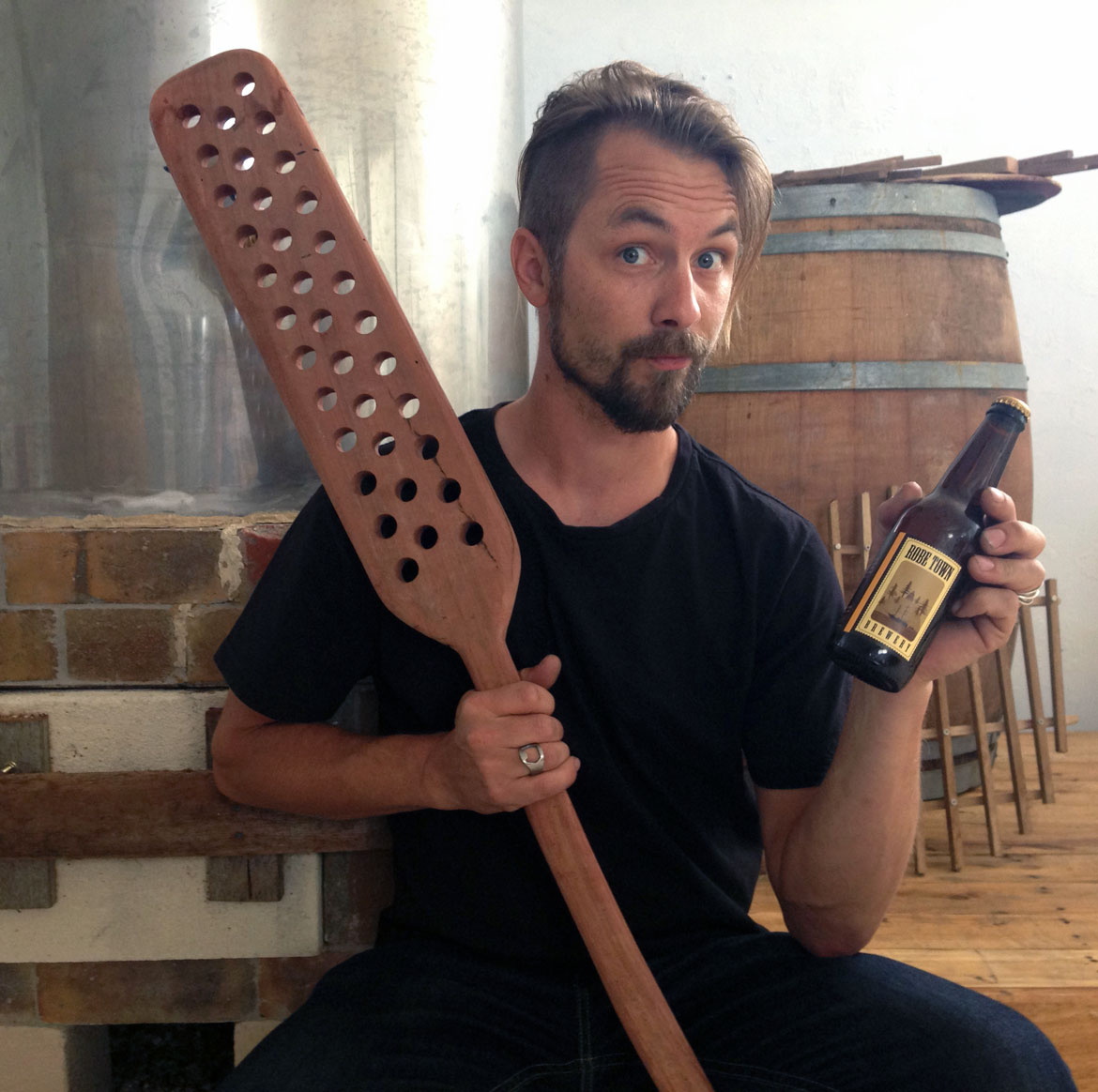 The oak barrels are lined with straw and hay which, according to Maris, add some “funk and character” to his beers while acting as a filter as well. He believes it is the only wood fired commercial brewery in Australia too, in keeping with historical brewing methods.

“It is sometimes difficult to adjust the temperature [as] I need different sizes of logs,” he says of methods a far cry from the high tech setups increasingly found around Australia. Currently the brewery only has one 1000 litre fermenter in operation but more will follow as the brewery grows.

Robe Town Brewery already has four core beers in its lineup and is experimenting with ageing porters too. The beers are a 5.1 percent ABV amber ale, a 4.5 percent ABV pale, an 8.5 percent ABV porter and the latest release, Shipwreck Stout at 6.5 percent ABV.

“Within the next six months, we will have more to add to that core range,” adds Maris.

Wood fired kettles, open fermentations, oak barrel mash tuns and other historical ideologies all combine to make Robe Town Brewery a unique and rare find even within the colourfully diverse contemporary craft beer world. If you're keen to find out more about this up-cycled brewery created on a shoe string budget, you can join Maris and Kristi for its unveiling in Robe this Sunday (August 23) or head to their cellar door at your leisure. Two of Australia's bigger breweries flew the flag for the country's beer industry at the prestigious World Beer Cup. James Squire and Stone & Wood took gold and silver in the same category and took time out to share their thoughts with us. read on