Bulimba – a riverside pocket in Brisbane’s east – is the kind of place that continues to draw pride from its traditions. From shipbuilding to wharfage to defence, the industries that built the suburb have largely come and gone, leaving an impression on the place’s identity and its locals.

Perhaps no industry has left its mark more than brewing, however, and no beer more than the eponymous Bulimba Gold Top ale.

For 135 years, Bulimba was at the heart of brewing in Brisbane – right up until Bulimba Gold Top was discontinued in the 1980s, leaving a multi-decade void. However, since opening in 2017, Revel Brewing Co in Bulimba’s Oxford Street has filled that space and revived the long-held tradition in the suburb.

As co-founder Matt Flexman puts it simply: “We wanted to bring brewing back to Bulimba.”

From the outset, Matt and fellow founder/director Jay Neven – both long time locals – wanted their brewery to feel like a cornerstone of the community, and it hasn’t taken them long to largely achieve that status.

After a hugely successful year that followed their opening, during which they claimed several awards for their beers, it was the COVID-related shutdowns that really rammed home the place they’d sealed at the heart of their community.

"We've always believed in the cultural artery that Oxford Street is, and we believe our brewery is really part of that heartbeat now which we are so proud of," is how they put it. “Everyone knows us, and everyone has supported us, particularly through the pandemic.

“Even during COVID we couldn’t keep the locals away. It really was touch and go there in March 2020 – if our community had not been behind us, we wouldn't be here now. We're really humbled by it."

As such, they rebounded with even more of a commitment to give back: through sponsorship of local sporting teams and local events, and, of course, "brewing fresh indie beers!"

While there’s no Gold Top on the menu (a trademark to which CUB holds the rights), the beers have made their mark on the locals and the wider community. A core range of quality and highly drinkable beers includes a hard-working lager, a resin-packed IPA, a quaffable summer ale, and a much-lauded pale ale – all of which have even snagged tap spots in some of the area’s older, more mainstream establishments. Alongside their staples, the Revel team maintains a steady flow of new releases, often featuring collaborations with local businesses.

Their rebound from the pandemic has been spectacular too, thanks to the creation of a second, and much larger brewery and restaurant inside the century-old, heritage-listed Acetate of Lime Factory, designed by brewer and chemist Auguste de Bavay. It opened to the public in November 2021, overlooking the Brisbane River a mere stone's throw away from their Oxford Street HQ, and is another sign of just how far craft beer has come in Australia over the past decade.

The new Revel (shown in the first seven photos of the slideshow) isn't just a landmark venue for Brisbane but sees the team breathing new life into a building that's part of Australia's historical brewing DNA – honouring the past while offering their community a taste that's very much of the present. Given how much they've achieved in their first few years of operation, who knows what the future holds for Revel.

As for their original venue in Bulimba (in the last four photos of the slideshow), it's about as classic a contemporary suburban brewpub as you could wish for, centred around shaded picnic tables in a grassed area outside for people to enjoy a beer along bustling Oxford Street. Inside, it’s an open and airy space with long bar tables that occupy the spaces not taken up by the brewery’s 15hL brewing system and their busy kitchen.

While Brisbane’s weather is suited to year-round outdoor drinking, the drawcard for sitting indoors is the ever-present and highly-sensual aroma coming from the site’s hardworking wood-fired pizza oven. Pizza is arguably the best beer-drinking food and Revel do it as well as anyone else: both their wood-fired pizzas and their pasta are excellent and incredibly popular. It’s unknown what, if any, food was available from Brisbane’s Gold Top-producing brewery in the late 1800s, but it surely wouldn’t have been as good as this.

NB The map here shows the location of Revel Rivermakers. The Bulimba HQ is at 41 Oxford Street, Bulimba, and can be found via the free Crafty Pint app. If there was ever going to be a beer to re-establish brewing in Bulimba, it’s this one. Gold Top might have had a 135-year head start but Revel Brewing Co’s Pale Ale is undoubtedly the beer for the times. A balanced, dependable and drinkable classic American pale ale, it’s an inviting beer that you just can’t imagine ever not being brewed in the area. It pours golden orange in the glass and there’s abundant citrus and grapefruit notes, along with a little spiciness. A slight sweetness and… Read more
Golden It’s true, Bulimba isn’t the working-class suburb it once was. The locals might have left the wharves for legal firms but that reportedly hasn’t dampened their tastes for hard-working, no-nonsense lager. It’s not hard to see why Revel Brewing Co’s lager is popular in the area – it’s easy-going, drinkable and jammed full of hops. It’s a clean, German pilsner with a slight malty sweetness and is brought to life with New Zealand hops that bring notes of spice and lime zest. If you’re… Read more
Pale Yellow Since opening in 2018, Revel have sought to add a dose of revelry to Oxford Street. Perhaps there’s no clearer sign of what the brewery team is wanting to achieve than by offering a 7.5 percent ABV beer in its core range. Yes, the Revel Brewing Co IPA is bigger than most core range IPAs out there but it – like most of Revel’s beers tend to be – is balanced and scarily drinkable. With a lean and clean malt profile, the hops really shine in this beer. Upfront there’s big, assertive notes… Read more
Golden Revel rounded out their new core range at the lower ABV end with the release of a well-crafted session ale in spring 2021. For a brewery where the limited releases – and even some of the staples – happily stray into the 7 percent ABV-and-beyond stratosphere, introducing a session ale seems reasonable enough. Fortunately, despite all the session ale connotations, this one is packed with as much hoppy goodness as modern physics permits. You’d only have to walk past it to get a strong aroma of… Read more
Golden Yellow Revel Brewing Co’s XPA is crisp, smooth and smells of summer fruits. It’s an early afternoon thirst-slaker for the hottest days of the year when things are at their most languid and the simple act of lifting a glass to your mouth can seem too much. Straw coloured in the glass, low on bitterness and light in body, it’s brewed to be drinkable in the most oppressive of Brisbane conditions. It’s all about the late addition hops here, which give the beer a brightness and abundant notes of citrus,… Read more
Pale Yellow From the vantage point of Revel Brewing Co’s new digs high up on the banks of the Brisbane River, the sunsets are really something. It’s not clear whether this particular sunset was the inspiration for the 2021 addition to their core range, Sunset Haze, but it’s hard to imagine it wouldn’t have played a part. The brewers have been rolling out hazies – in many shapes and form – in their limited range for a while now and have settled on Sunset Haze as their flagship. It’s a classic hazy… Read more
Golden 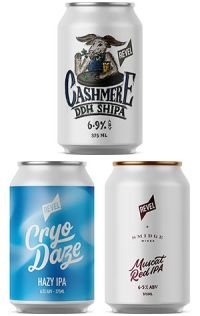 It’s been just over a year since Revel Brewing opened their second venue at Rivermakers, and with their limited releases coming out at a rate of knots they’ve been making very good use of all their extra brewing capacity. Case in point: no less than three IPA variants released in the first half of spring. Cashmere is a double dry-hopped single hop IPA that doubles down on, you guessed it, Cashmere hops from the US. There's a solid bitterness alongside notes of coconut and citrus that punch through… Read more
Red 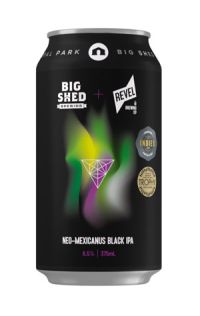 This Neomexicanus Black IPA first came into existence in the winter of 2021 when the Big Shed crew flew in to collaborate with Revel in Brisbane. The idea was to feature hops from the neomexicanus sub-species: a collection of hops that grow wild in New Mexico and have, in some cases, been brought into the commercial programs of American hop-growers. They chose to feature these often quirky varieties in a black IPA, a move that seems to have been a wise one with the beer picking up trophies at the… Read more
Black If ever a brewery deserved to do some celebrating, it’s Revel. After a remarkable year that's seen them open a new brewery and taproom in a heritage listed site, win a champion beer trophy at the Indies and undergo a rebrand, they're capping it all off with four new beers for their fourth birthday. It’s exhausting enough just writing that sentence – imagine actually doing the work...   First cab off the ranks is the Phoenix IPA, which nods to the brewery’s ability to rise from, if not the… Read more
Golden Yellow For a brewery accustomed to taking risks, it comes as no surprise Revel Brewing Co have taken on a style that rarely sees the light of day in balmy Brisbane: the Scotch ale. Launched as the city rolled into spring, it’s unlikely you’ll be enjoying this one fireside but still there’s plenty of intrigue to this beer to keep the conversation going after dark.  Dark amber in colour, the beer lights up like an ember when held to the light. The kind of beer best enjoyed in a wide snifter or tulip… Read more
Rich Brown