Long ago, Castlemaine’s claim to fame was the local abundance of two valuable resources: gold and beer. Despite the town retaining so many of its historical buildings, those particular reasons for being had long since gone; the gold had all been mined and the last brewery closed its doors in 1925.

Prior to that, during the 19th century, Castlemaine was home to more than a dozen breweries, including Lion Nathan-owned Castlemaine Perkins before the company was moved to Queensland. The rest of the town’s breweries closed their doors over time, with many of them bought out by competitors in Melbourne.

Yet, in 2014, brewing made its return as Shedshaker Brewing – initially Castlemaine Brewing Co – beers started appearing across Central Victoria. Initially brewed out of Bendigo’s Brookes Brewery, since April 2016 Castlemaine’s own brewery and taproom has been operating in the town’s historic Woollen Mills.

Sitting opposite the Botanical Gardens, the Woollen Mills date back to 1875 and were transformed in 2016 into a hub of local and artisanal production. Castlemaine’s fellow tenants include bakeries, a coffee roaster and a small winery, all of which share in the brewery’s community-centric ethos.

Although when the brewery launched it bore the name of the town, a cease-and-desist from Lion Nathan, concerned the name would invoke confusion with its Castlemaine Perkins brand, led to a refresh for the brewery. With that, Shedshaker Brewery was reborn, the name having previously been used for one of the brewery’s best-selling beers and chosen for its country connotations.

Castlemaine’s rebirth as a brewing town owes it to the brewery’s three owners, Michael “Wolfey” Wolfe, Jacqueline Brodie Hanns and Doug Falconer. All three are a big part of the local community and were spurred into starting the brewery by an eagerness to see brewing return.

Wolfey’s family’s history in the area extends all the way back to 1856 when his ancestor Peter Wolfe arrived. The Wolfe family’s lore holds that, despite being a local cop, Peter didn’t mind making booze on the sly.

Fans of Australian music are likely to be fairly aware of Doug too: he's the drummer in Hunter & Collectors. Meanwhile Jacqueline’s background in event planning and hospitality leave her well placed to run The Taproom and plan the brewery’s busy calendar of social events.

When Shedshaker Brewing first started, its beers were largely focused on traditional styles but, since taking over as head brewer, Brad Iles has clearly has been given freedom to experiment. Their porter and lager are both classic examples of their respective styles, while the Knucklehead Rye IPA and Espresso Lager show a willingness to push styles and collaborate with some of those businesses under the same roof. Another unlikely collaboration – this time with CSIRO for a conference – led to the creation of hemp ale Hempathy.

Those beers are all available at The Taproom and are served alongside a few local ciders, wines and ginger beers. The Taproom itself sits adjacent to the brewhouse and is something of an extension of the people created it. The walls are lined with Wolfey’s artwork, while Doug’s Hall of Fame ARIA sits next to equally impressive trophies from the local “Castlemaine Idyll”.

As something of a community hub, The Taproom regularly hosts comedy nights and live music that visitors can enjoy from the bar, shared tables or the beer garden out the back. From Friday to Sunday the visitors can sample the brewery’s beers alongside house made pizzas. And, in a new offering devised during the COVID-19 shutdown, they now offer tapas from Tuesday to Friday.

With brewing having been absent from the town for close to a century, Shedshaker is a much-needed addition. Furthermore, Castlemaine’s location between Bendigo and Woodend means the brewery is contributing to the region’s growing reputation as a craft beer destination. Beer tourists from Melbourne or further afield can now travel all the way from Victoria’s capital to Echuca making regular stops at a variety of craft breweries along the way. Just as it used to be. In 1986, the Australian rock outfit Hunters & Collectors released their fourth studio album, named after the term the band used to describe alcohol. Human Frailty was both a commercial and critical hit for the band and cemented their position in the annals of great Australian bands. Thirty years later, Hunters & Collectors drummer Doug Falconer is part-owner of a brewery in Castlemaine, and the brewery owners couldn’t resist making a beer to celebrate the album. Perhaps Australia’s first… Read more
Golden Fitting somewhere within the hazy style area that is the pacific/summer ale category, Shedsher's approach has that sessionable quality most drinkers would expect. The inclusion of wheat in the malt profile makes for a lean body, while exclusively using Galaxy provides punchy hop aromas to a beer that has those modern classic Australian hop flavours of fruit salad, melon, tropical fruit and passionfruit. The beer’s smooth mouthfeel and lightly carbonated body contribute to what is overall a very… Read more
Golden Yellow Originally brewed for GABS in 2016, Espresso Lager has since regularly appeared at the Castlemaine Brewery’s Taproom and on taps around Victoria. While coffee is a regular feature in stouts or porters, it doesn’t turn up as often in lagers. Starting off as the dark German Schwarzbier style, the lager is then "dry hopped" with coffee beans from their Castlemaine Mill co-tenants Coffee Basic’s Fair Trade Tiger Mountain coffee. The resulting beer has plenty of rich coffee flavours that… Read more
Black Taking its cues from the goldfield town where it was brewed, Castlemaine Brewing Co’s Golden Ale pours a light gold with a pure white head. The beer’s malt profile provides a subtle sweetness upfront, matched with some earthy and herbal notes. The use of the American hop Cascade and Australia’s Galaxy drive aromas of citrus, passionfruit and some pine. Meanwhile the classic English mainstay, Goldings, creates an upfront bitterness on the palate, which soon fades away before the beer finishes… Read more
Golden Yellow When you’re trying to revive brewing in a town where it’s long since gone, it seems only fitting that you should look for local figures to inspire your beers. This Celtic Red Ale is something of a tribute to Michael Wolfe’s Irish ancestor Peter Wolfe, who arrived in the Castlemaine goldfields in 1856. Considering Peter was a local officer of the law who was a fan of making a bit of grog on the side the Celtic Red does seem rather appropriate. Like the red ales of the Old World, Castlemaine’s… Read more
Red There's plenty about Castlemaine Brewing Co’s pilsner that make it a perfectly traditional lager – yet it does have some modern features. The fact it pours with a light but shimmering straw body and fluffy head puts the beer into bohemian pilsner territory, as does the use of Saaz hops to produce those classic, lightly spiced and herbaceous aromas of the noble hop. Then there's a slight bitterness with a building intensity that lingers on the palate once the beer is finished. Yet the inclusion… Read more
Pale Yellow Castlemaine Brewing Co’s Rye IPA brings together big notes from both its malt and hop profiles without any sign of collapsing like the comedy trio with whom its name is most closely associated. The beer’s lashings of Australian and American hops bring with them big flavours of tropical fruit, pine and a lingering hit of blood orange. While the rye in the malt profile leans heavily towards notes of a peppery spice, those flavours are balanced by a soft sweetness from the remaining combination… Read more
Rich Brown When Castlemaine started life as a town of town and beer, much of the beer poured in the town would have been porter: the classic style of the working class. As an all round tribute to that style, The Night Porter pours deep and dark black, with a light, fast receding head. The roasted malts bring forward flavours of black coffee and some chocolate, with a creamy vanilla/milk chocolate side to the aromas and some hints of dark fruit in there too. Will Ziebell… Read more
Dark Brown 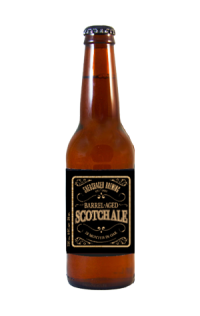 With Melbourne's reputation well and truly cemented as a ripe destination for craft beer tourism in Australia, it's little surprise that regional Victoria is seeing more and more breweries pop up. But, while many of these fledgling operations are still establishing their foundations, breweries like Castlemaine's Shedshaker, which was launched in 2014, are hitting their stride. With a now well-established core range, they're able to play in the fringes, producing multiple iterations of niche style,… Read more
Rich Brown By virtue of its close association with marijuana, Australia's hemp industry is a fledgling one. It was only in November 2017 that laws regarding the consumption of hemp-based products changed and now hemp farming is becoming serious business. It’s also an industry championed by many in the know, including the CSIRO who, when running the inaugural Australian Hemp Conference, asked Shedshaker to brew a beer just for it. To meet the brief, the Castlemaine brewery enlisted the help of Bunjil Farm… Read more
Golden Yellow Shedshaker is the new name for the Castlemaine based brewery formerly known as Castlemaine Brewery. Wilson & Market is the multi-faceted Prahran Market based café, restaurant, wine bar, function space and food & wine store. And Gone Troppo is the name of a seasonal summer ale created by the pair. It's a pale drop hopped with Vic Secret and Galaxy that we're told give the drinker "tropical pineapple and passionfruit aromas ... with a background of pine and citrus" as well as "a… Read more
Pale Yellow