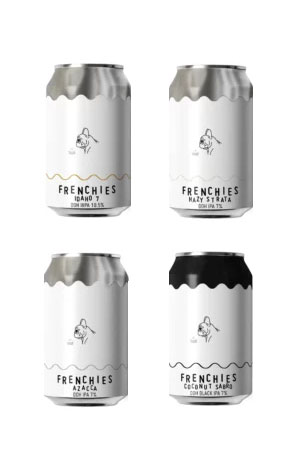 I don’t know about you, but when I was three years old, I was absolutely not brewing and releasing four different single hop IPAs. I mean, I barely even understood the relationship between amylase and saccharification of starches at that age. Although, in my defence, I don’t know how financially feasible selling a hazy IPA would have been in 1989, even with the novelty of it having been brewed by an infant? Probably best that I stuck to chicken loaf and tomato sauce sandwiches and watching Dumbo on repeat.

In any event, Frenchies are evidently far more developmentally advanced than the average tiny human and brewing up four big, hoppy IPAs seems as good a celebration as any for their three-year milestone. What's more, I absolutely love releases like this. Each one of these beers is showcasing a particular hop variety in a slightly different way. There’s a straight up big West Coast IPA, a massive triple West Coast IPA, a hazy IPA and a black IPA. Single hopped beers are a wonderful way to evaluate the characteristics of hop varieties and the four on offer are some of the newest and coolest kids on the block.

First cab off the rank is the Azacca DDH IPA. Azacca, named for the Haitian god of agriculture, only started becoming available in the Australian market within the last three years or so. With a reputation for intense tropical fruit and excellent bittering potential, Azacca should be perfect in a West Coast IPA, and in this case, it is.

As predicted, the aroma is lush. Most prominent here is mango and mandarin with a bit of lingering pine. The resinous hop character is pronounced but surprisingly the bitterness seems fairly restrained. There’s a touch of crystal in the malt bill which lends that slight caramel sweetness and a very pleasing golden hue in the glass. For a 7 percent ABV beer, it finishes clean and is extremely moreish.

Next up is the biggest beer of the lot, the Idaho 7 DDH IIIPA. Coming in at 10.5 percent ABV and dry hopped with “a ridiculous amount of hops”, everything about this beer is massive. Idaho 7, like Azacca, was released in the mid-2010s and took a few years to become widely available in Australia. In the years since, it has become extremely popular with many breweries regularly using it in all manner of hoppy brews.

Even just pouring this beer, you know immediately what you’re in for: aromas of orange and peach ooze out of the glass. On the palate, however, the hop characteristics morph from fruit into more herbal and pine notes. There’s a big whack of resinous bitterness that hangs around, tempering the malt sweetness from such a big beer. The booze is there, but it’s not unbalanced, and the beer finishes quite dry. Honestly, I’m glad I only had one because the temptation to go again and just write the next six hours off would have been nigh-on irresistible.

Imagine brewing four IPAs in 2020 and not including some kind of juicy hazyboi. Well, I’ll have to keep on imagining such a ridiculous situation because that’s exactly where we are heading for birthday beer number three. Here comes the Hazy Strata loaded with one of the newest and much-hyped hop varieties of the last 18 months. Strata is probably most well known for its mix of tropical fruit and dank cannabis like aromas, usually described as “passionfruit meets pot.”

The aroma of this one leapt from the can and gave me some intense memory association. The over-ripe paw paw, grass and deep earthy aromas sent me back 28 years and I’m just a little bloke wandering through my grandma’s garden near the paw paw tree. I honestly didn’t really get any of the more explicitly cannabis-like dankness that Strata purports to have but the blending of the earthiness and ripe fruit was very pleasant. With hazy IPAs/NEIPAs it’s sometimes hard to know what to expect in terms of bitterness and mouthfeel but this one leans more towards solid bitterness with a creamy mouthfeel and minimal underlying malt sweetness. Overall, it’s a great example of this sort of hazy IPA and hopefully one that’ll make a reappearance.

Last but not least is the Coconut Sabro DDH Black IPA. Now this what I’m talking about! Sabro has absolutely been the darling of the Australian beer scene in 2020. There’s probably no other hop currently available that boasts such a clearly distinct aroma and flavour profile as the hop formally known as HBC 438. The rise of Sabro has gone hand in hand with the rise of the milkshake/oat cream lactose laden IPAs in 2020. And, with its unique combination of coconut, pineapple, cream and citrus, Sabro pairs extremely well with those bières du jour.

This black IPA, however, contains absolutely no lactose and incredibly no black malts either. The grist seems to be more or less the same as the Hazy Strata except with the addition of Sinamar. Sinamar is a malt extract made from roasted malt mostly used to colour correct dark beers that have finished not quite as dark as expected. Essentially, it’s a food colouring that also complies with the Reinheitsgebot.

So here we have a coconut black IPA that contains no coconut or black malts. And, by god, it works! The aroma is a dead ringer for a piña colada. Coconut, pineapple and cream abound but what’s really cool is it tastes more like a Bounty chocolate bar. Sinamar isn’t generally used to impart any flavour but clearly when used judiciously can absolutely impart some dark chocolate into the mix. There’s so much coconut going on it’s difficult to accept this beer has probably never even seen a coconut palm. It seems like a total gimmick but this is genuinely an enjoyable beer and testament to the Frenchies ingenuity. May we see it for many more birthdays to come!