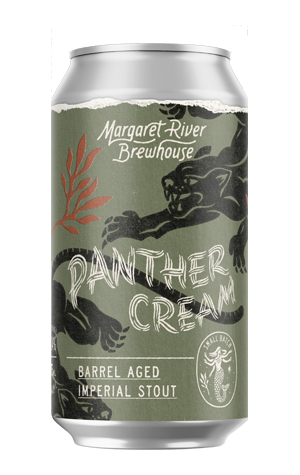 Sitting atop the long list of beers brewed at Margaret River Brewhouse is Panther Cream. It sits atop the pile in part due to its reputation as one of the best of its class in the state (with multiple trophies to prove it), and also due to its terrorising demeanour as a behemoth of a 10.4 percent ABV barrel-aged imperial stout. This year's iteration finds itself in 375ml cans with a new label, a touch more booze and more time spent in peated ex-Port barrels.

Brewed to be big, Panther Cream features a lengthy grain bill that includes oats, roasted barley and chocolate malts. Oily black in colour, a velvety mouthfeel, a lengthy finish and a dense, everlasting mocha head are all by-products of a cleverly concocted recipe underpinned by a robust hopping regime that sees 55 IBUs of bitterness help strike a balance between sweet, chocolaty decadence and grassy bitterness. This effortlessly unites with notes of prune, vanilla and fortified wine from the two months in barrel. Alcohol is evident but not overbearing, easily undercut by coffee and fudge, adding to a lasting, complex palate and aroma.

Panther Cream graces us with its presence just once a year at winter in very limited quantities and, unsurprisingly, selling out pretty quickly.

Available on tap and in cans at the brewery

And at selected WA stockists.