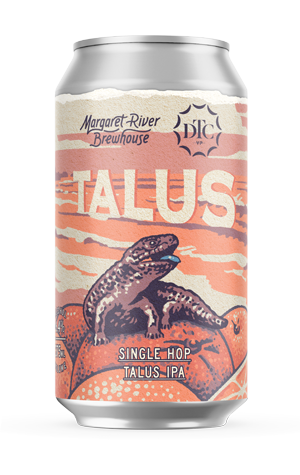 Margaret River Brewhouse know their way around hops, and for their latest limited release in collaboration with Vic Park's Dutch Trading Company, they’ve decided to showcase a single hop variety, the relatively newly arrived Talus from the US.

Talus IPA pours crystal clear with a lasting, lacy white head and dark orange hue. The hop’s trademark pink grapefruit character is almost palpable, delivered with gentle pine, orange zest and a candy like sweetness on the nose. On tasting, spritzy carbonation combines with sweet fruit character, bold citrus and some light caramel notes to elicit memories of sherbet and sour candy, although not nearly as brazen or short-lasting. Balance, light mouthfeel and a long finish make every sip a pleasure, with all aforementioned flavours and aromas coming and going throughout each take.

Margaret River Brewhouse may have indulged in a new hop variety with an experimental background for this release, but their Talus IPA is effortlessly drinkable thanks to their measured and considered approach to brewing hop driven beers.

And other MRB WA stockists