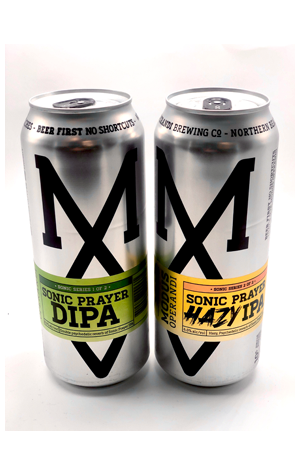 The psychedelically-inspired Sonic Prayer first started sending out its hoppy reverbs as a limited release in 2015 but its popularity - both among drinkers and within the Modus team - soon saw the beer move into the brewery’s core range. Now Modus have quite literally doubled down on the beer by offering up two super Sonic twins: Hazy and Double Sonic. You can watch the yarn of their conception here (one told with a reliably tongue-in-cheek approach) but the premise of the double release is a simple one: turn one Sonic cloudy and turn up the volume on the other.

Hazy Sonic plays with how and when the beer’s hops were added and uses London Fog, a yeast from White Labs we suspect Modus keep piled high in a corner of their cool room. As a result, it pours with a slight haze to its orange hue, and provides a mix of peach, citrus and pine. There’s an edge of bitterness in there too but, thanks to the malt sweetness and well-rounded mouthfeel, all told it’s a softer Sonic.

Sonic DIPA, on the other hand, sees the ABV boosted to 8 percent but retaining balance. The brewing team achieve this by matching a little sweetness against an otherwise lean malt body and big resinous pine flavours supported by peach, pineapple and guava.