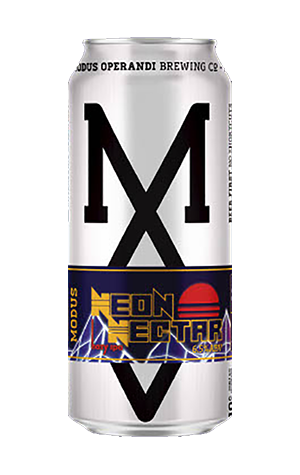 Modus Operandi 's August 2021 seasonal is a bit of a retro release for the brewery, with it being some time since they released a big hoppy beer in the big silver cans. There’s a certain irony to Modus calling this beer ‘Neon’ too, considering how light-blockingly hazy it is; seriously, you could wallpaper a room with the stuff. Don’t get me wrong - the oat-and-wheat-induced cloudiness doesn’t stop it from being bright orange but if you’re going to photograph it, make sure you hit it with light from the right angle or you’ll find yourself in an eclipse scenario.

The ‘Nectar’ part of the title is on the money. Big fruit on the nose becomes even bigger fruit in the mouth, with mango nectar and dried apricot filling out the senses (well, just two of the senses) and sharp grapefruit peel cutting straight down the middle. And despite Neon Nectar pulling so much of its aroma from the triple dry hopping, there’s still a bitter kick in the back end that pairs nicely with the grapefruit flavour.