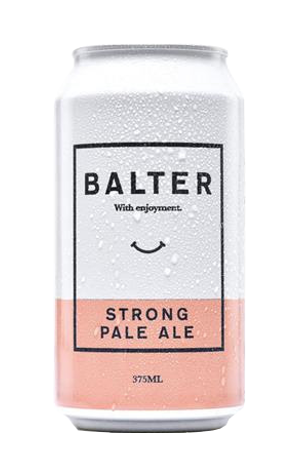 Good beer is for everybody. That’s Balter’s motto, and it’s not just empty words – they walk the talk. They realised there’s a fair ramp up from their crowd-pleasing XPA at 5 percent ABV to their IPA at 6.8 and, thus, room for another beer in their lineup. (Isn’t there always room for another beer?)

Enter the Strong Pale Ale, sitting bang in the middle at 5.9 percent ABV. It’s there for when you’re after a bit more punch than the XPA, but you’re not yet looking to commit to a bruiser of an IPA. For when you want a bigger hop burst than an American pale ale but you’re not in the mood for a blast of bitterness.

This isn’t a subtle beer. The instant this apricot coloured nectar hits your lips, the flavours front up and do their thing: a whack of fresh pawpaw, juicy citrus and mango shows right from the start; you can thank the Citra, Mosaic and Centennial dry-hopping for that. The malt sweetness and the bitterness don’t waste any time, either. They’re right there in the front- and mid-palate, assaulting the senses in a very good way. But, before you’re overwhelmed, the bitterness recedes, the favours soften, and you’re left with a relatively dry finish.

You’re ready, in other words, to take another swing.