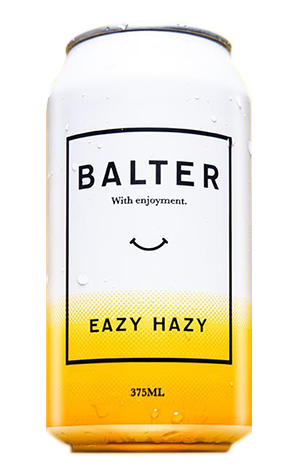 Another day, another entry in Balter’s Hazy series.

Scott Hargrave, Balter’s head brewer, says Eazy Hazy was the result of a few experiments last year making session beers, including Bunker Buster, Super Sipper, Quaff Bomb and Session Hazy. Each of those was well received in their own right, which says a lot for the final result – low alcohol, low bitterness, plenty of flavour, plenty of drinkability. Would you expect anything less from Balter?

This opaque yellow drop is fruity but gentle and just right for sipping on to relax at the end of the day as you’re doing yoga in your living room (trust me on this.) While Balter gives Eazy Hazy many of the same descriptors as Bunker Buster – lime, passionfruit and coconut – I found myself enjoying tinned pineapple and pear juice, with just a lick of Sabro hop coconut flavour showing its head in the back end as I kept drinking.

But you'll definitely find it easy.