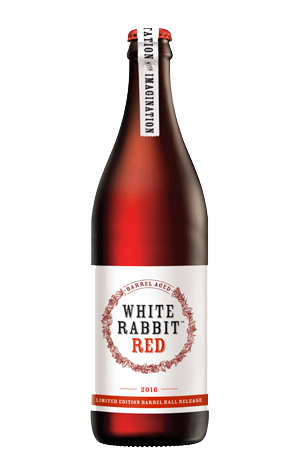 Had you invited a cross-section of beer lovers to predict the direction White Rabbit would take once the Lion purchase of Little World Beverages (which owned both the then Healesville-based brewery and Little Creatures), it's unlikely many (OK, any) would have said: "Building a large barrel ageing program and turning it into an immersive visitor experience. Oh, and maybe adding a Flanders red style beer to its core range." And yet...

In hindsight, if you look back at what the brewers liked to get up to on a very small scale when they still called the Yarra Valley home, there were hints as to what might be coming: occasional single barrel projects that sometimes dipped into sour territory. Still, the arrival of the Barrel Aged Red as a small scale teaser of what will ultimately become their fourth core beer is one that suggests White Rabbit could play a role in popularising sour beers across Australia similar to that which Little Creatures played with American hops a decade and more ago.

But back to the start and a wine barrel from Innocent Bystander into which Rabbit head brewer Jeremy Halse put some of his Belgian Pale Ale along with freshly picked grapes. A barrel that, thanks to the microscopic magicians in the grape must, turned said beer so dry and acidic that the brewers were amazed, intrigued and inspired to delve further. So down the rabbit hole they went. A beer more akin to those rich red ales that the likes of Rodenbach use to make their iconic beers was added to the barrel they're calling the "Goldilocks barrel", along with more grapes, and left to do its work. Meanwhile, discussions continued about blending this with a younger beer to create an approachable sour.

Fast forward to this year, Goldilocks had done her work on the barrel portion of the beer and it was time to blend it with a younger beer, one they'd brewed that wasn't too dissimilar to Rabbit's Dark Ale but with more crystal malt. Jeremy figured a blend of around 10 percent of the aged beer would given them the desired result; in the end it wasn't enough and up and up the proportion went until they were happy: ending up somewhere around 30 percent. And thus they had the Barrel Aged Red.

What's it like? Well, the elements you'd be looking for in a Flanders red style ale are there, but kept in check so as not to scare people off; after all, the White Rabbit audience is rather less pointy end for the most part than, say, fellow barrel room operator Boatrocker. There are hints of acetic acid amid the full toffee aromas, some red berries plus a drying acidity and a touch of funk at the finish, while in between comes plenty of soft, creamy malts redolent of the Dark Ale.

For now the beer is only available in 750ml bottles from the brewery and on tap at a dozen venues, but plans are already underway to seriously increase the volume for next year; 120 barrels (and three tonnes of grapes) are currently allocated to the beer, with brewers' fingers crossed that they are able to scale up what they got from the single barrel. It promises to take up rather a lot of space at the brewery too. Having realised they need 30 percent of the aged beer to get the results they want instead of ten, the barrel space required tripled instantly. But, says Jeremy, the aim is to do this right. And how good is it that this wing of Lion is being given enough freedom to do just that?