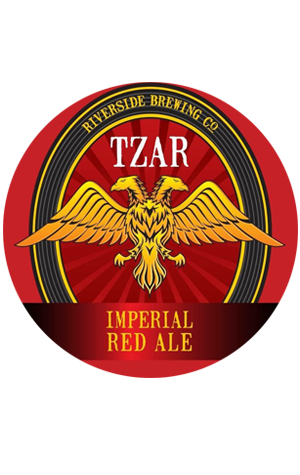 When a brewer leaves a much loved brewery, there’s undoubtedly a lot of pressure on the successor to step into the role seamlessly, maintain the quality of the beers and ensure things carry on as smoothly as possible. But from the new brewer’s perspective, along with that challenge there’s surely also a desire to stamp their own mark on proceedings. At Riverside, following the departure of brewery founder Dave Padden late in 2014, Craig Deacon and Damian Iowa stepped into the void to share brewing duties and everything else that entails. Until now they’ve more or less been plugging away quietly, maintaining the brewery’s core range and re-releasing some old favourites. But now they’re ready to properly impress their ideas on Riverside by branching out with their own creations. And, for their first new seasonal, they’ve gone with a recipe Damian has developed over several years: a nine percent ABV Russian-inspired Imperial Red Ale named Tzar.

The Tzars of old weren’t afraid of a little opulence and indulgence and nor, it seems, is this beer. The recipe counts among its ingredients pine-smoked Russian Caravan tea (a caffeinated nod to a life growing up drinking it), juniper berries (a direct result of having enjoyed the Norwegian Wood from the HaandBryggeriet Brewery) and toasted fennel seeds (because, well, he just always thought they would work). The brewers got busy with the mortar and pestle, adding the crushed ingredients to a base featuring six different malts which wraps things up in a beer of deep red colour. It may not fall neatly in line with the hop forward reputation of the brewery to date, but the arrival of the Tzar is bold nonetheless and a fitting beginning to the new regime at Riverside.