The Scratch is a funny beast. Among Brisbane's rapidly growing number of craft beer venues, it is one of the smallest. It's pretty much out on its own in Milton (unless you count the XXXX factory towering over it), whereas many of the other venues can be found in clusters. And its decor could well have been transposed from a pungent bar tucked behind a beach in North Goa (albeit with rather more toy soldiers).

Yet, to the residents of Crafty Towers at least, it feels like the beating heart of the Brisbane scene, a result no doubt of its owners' and staff's seemingly boundless enthusiasm for everything (except mundanity), be that supporting local artists and bakers as well as brewers, conceiving ever more convoluted ways to promote appreciation of great beer, or simply having a good time all the time. Its founders are also responsible for the biggest craft beer event (or events, to be precise) in the city too, being part of the collective that founded the Brewsvegas beer week in 2014.

Those founders are Kieran Ryan (above left), Patrick Shevlin(above centre) and Ben Nichols (above right), albeit Patrick is now living in Melbourne and working at Two Row.

Here's what they have to say for themselves in advance of Brewsvegas 2015, which runs from March 23 to 29, as we invite them to be our latest Craft Beer Heroes.

We are widely regarded as the two creepy uncles of the good family Scratch, a fun-loving beer bar in Milton, QLD. We also help run Brissy's week-long beer-fest known as Brewsvegas. In both cases, Ben does all the work, but Kieran came up with the names.

If anything, a desire to be part of a world that was new, exciting, and very real, on all levels from quality to community. It was instantly a world that we could get behind and support for all the right reasons, whether from a business, cultural or personal perspective.

Kieran cut his teeth working at the now defunct Festival Cellars – one of the original crafty bottle-o's in Brisbane – getting weirdly excited about all the new beers that would roll in each week. Ben's job was to help try all the beers. And pay. 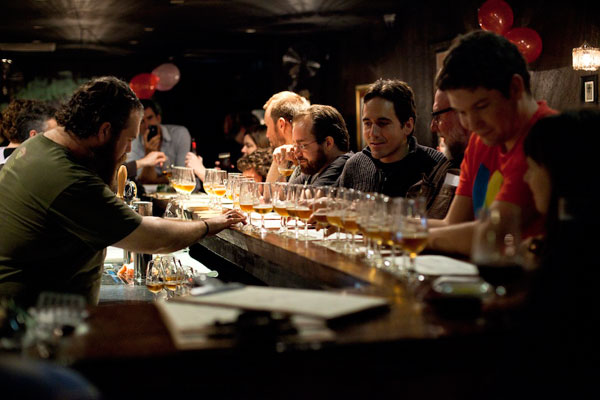 As Wayne Coyne, of The Flaming Lips, once pondered: "Why does it matter?"

Probably the moment we realised we hadn't stuffed this up and connected with a community we could both serve and drink beers with. That and our ongoing professional war with Tippler's Tap which we are still adamant we are winning. #scratchvstipplers

Easy. They would be sandwiched between us as we sat embracing in the dappled evening light of a balmy Brisbane afternoon, the sun refracting sharply through the majestic winking eye of the XXXX man who watches our every move, casting a beam directly into the dewy trio of local bevvies adorning our table, spanning the full spectra of amber hues known to the beer gods, arcing the light once more into a brilliant hologram in the shape of Matthew McConaughey riding a unicorn into the sunset. That failing, the beer almost always speaks for itself.

Three beers is too little, so we'll go with the gypsy brews of Queensland that represent the passion, the flavour and the variety rampant in a community as adventurous as it is supportive.

Thanks, chaps. See you soon for a spot of XXXX winking eye refraction!

You can check out the full Brewsvegas program here.