David Anderson’s musical aspirations were in doubt from the moment he lost his finger. It wouldn’t have been such a problem if he were, say, a vocalist or a drummer. He played bass. Four strings. Four fingers. It’s hard to reach the clever chords with just three.

That’s not to say it can’t be done. Django Reinhardt, Tommy Iommi, Jerry Garcia – they navigated the perils of combustive caravans, industrial mishaps and overeager axes on their way to extraordinary feats along the fretboard, all despite not having use of the full compliment of digits. That’s without the requisite mention of Rick Allen, who thumps on manfully minus an entire limb.

As inspirational as their output may be, none but those who have felt the touch of a phantom limb are in any position to judge the realistic prospects of achieving a career in the musical arts while at the mercy of such a physical restriction. It so happens, however, that they did inspire David and he did come back, touring and recording for a time. But things changed. He felt himself being pulled away from the front of the stage towards the back of the bar. Brewing was beginning to take over. And he was good at it.

Nowhere was that displayed more publicly than one late April afternoon this year. It was the Fresh Harvest Beer Festival, arguably the biggest celebration of fresh hops and harvest ales so far seen in Sydney; dozens of brewers, amateurs and pros, all vying to impress, principally with deft use of the latest hop crop.

David, a homebrewer, presented perhaps the least hop centric beer available on the day: a Manuka smoked porter. The public voted. The judges concurred. He won.

The success would prove to be a major leg-up for Nine Fingers, the name designated to his brewing company. The major prize was a chance to brew his winning beer on a commercial scale and receive 12 months' mentorship in building a beer brand. He gave the beer a catchy, musically influenced title, Smoke On The Porter, then it was kegged, canned and sent to some of the best bars and bottleshops across the city.

With the dust of the experience now somewhat settled and his first commercial beer available in the wild, we invited David to share a little more about he who brews Nine Fingers beers. 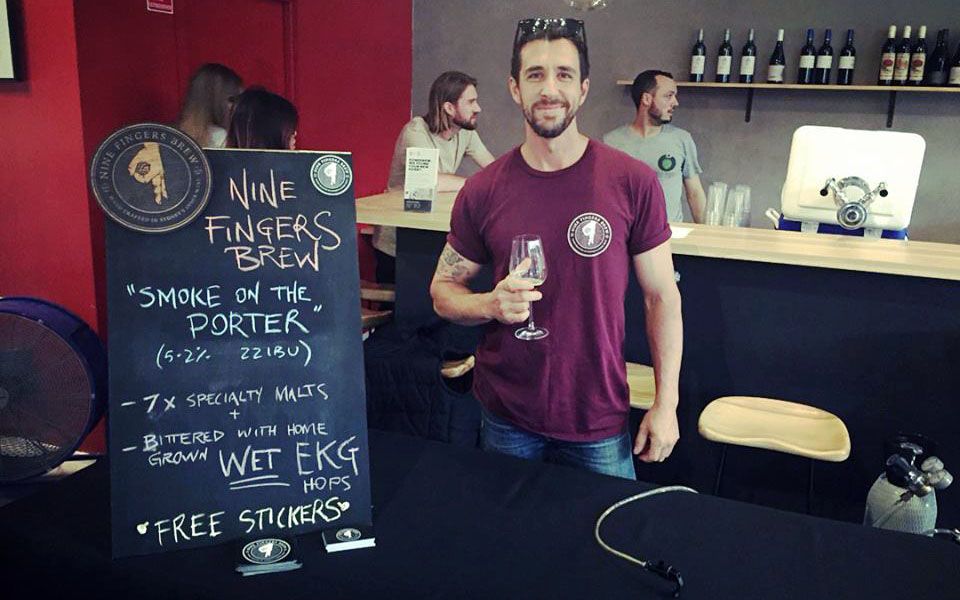 Born and raised in Sydney’s Inner West, I’m an ex-bass player who loves to brew beer and builds houses to pay the bills.

I started brewing 20 years ago with my dad. After he gave it up, I carried on the tradition, having fallen in love with the creativity and processes. I like to get as hands on as possible, including roasting and smoking my own malts as well as growing my own hops.

Tell us about the beer

Smoke on the Porter is a sessionable dark ale that finds a great balance between the sweetness of the seven specialty malts and the bitterness of traditional English hops. It uses two kinds of smoked malt, namely manuka and peat. It’s a drink for all year.

Are you planning to release other beers?

Yes, we’re currently finalising our next release which will be out later this year. It will be one of our other core range beers.

Was there a beer or a moment that put you on the path to becoming a brewer?

For many years my friends and family have been enjoying my beers and encouraging me along. But it was my recent win at the Fresh Harvest Festival that has given me the confidence and opportunity to take it to the next level – I must give special thanks to the Frenchies team [the brewery that hosted his commercial brew] and the Brewers Unearthed competition.

What beers are in your fridge?

I love dark beers but my fridge is constantly changing as I’m always trying all kinds of different beers. Nothing lasts long…

Something with a great hit of tropical fruit flavours that would suit an island location that you can drink all day, like my XPA: Whole Lotta Hops... ha!

If your brewing company was a band, who would it be?

Our motto is “Refreshing Traditions”, which means we respect and brew traditional beers and add our own touches to make them relevant in this modern market. Tame Impala is a great Australian band that I love and feel have that classic sound with a modern twist.

I’m still a huge music fan and it plays an evolving role in my life. A prime example is how I pay homage to some of my favourite artists and songs in my beer titles.

Where do you hope your brewing company will be in ten years?

Beer styles and trends have grown and changed so much in the last ten years, who really knows where anyone will be. However, I know I’ll still be brewing, still developing and making beer that I love to drink and making those beers available for others to enjoy.

They’re rolling out right now all over NSW in pubs and bottleshops from Redfern to Blaxland. The most up-to-date listing can be found on the @ninefingersbrew Instagram feed or our website – www.ninefingersbrew.com

Find other entries in our Who Brews...? series here.