As far as beer people go, Steven Blaine is one of the nicest you’ll meet. Besides a career with Little Creatures and now as the National Beer and Cider Category Manager for on-premise wholesaler 100 Proof, he hosts Cicerone study groups in Western Australia, motivated by a desire to improve beer education for the industry that he loves, and runs the Good Beer Project podcast with Pia "Girl + Beer" Poynton.

Taken together with his broad smile, genuine interest in people and the hustle of a young family and you'd have little inkling as to another side of his life.

As he prepares to travel to Melbourne to host the inaugural Good Beer Run as part of Good Beer Week, Guy Southern sat down with him to find out why a man with plenty on this plate already has decided to run one marathon a month for 2018.

“I come from a fairly unique family background. I was fostered and was sent away when I was about two-and-a-half and my younger brother came with me – he was about 18 months old at the time.

"When we were fostered, we were two of the highest security foster children in the state of Queensland – our names got changed and we were given new identities because our real parents were quite mentally unstable. They kidnapped my biological older brother when we were quite young so at that point it was decided that we probably shouldn’t have any contact with them."

The boys went to live with Tom and Lenore Blaine – "The best thing that ever happened to me," says Steve, who now regards the couple as his real parents. Later, they were joined by his younger biological sister too.

“Fostering is a very unique type of situation, it’s very much a random lottery," he says. "I just happened to go with a set of really amazing people with an amazing heart and a sense that they wanted to give back to people. For most of their life they were unable to conceive naturally so that’s why they went down the fostering path."

He says in the majority of cases foster children are moved from home to home, something that can be incredibly unsettling and leave children with little sense of security.

"We got to stay together for the entire time that we grew up, which incredibly rare," he says. "If you look at how we all turned out versus my older biological brother, who didn’t get to live with us, he unfortunately committed suicide and had drug issues and all sorts of things that went wrong because he didn’t have that solid, stable upbringing.

“We were absolutely blessed. Mum and Dad weren’t wealthy, they just loved having kids."

In addition to Steven (pictured at top and above) and his younger biological siblings, the couple raised Rebecca and Trent, who he regards as sister and brother, even though they're not biologically related, as well as another 25 kids on a more short term basis. Completing the family portrait, at 39, Lenore gave birth to her own child, Steve's youngest brother Lech.

"They really did give back," says Steven. And now he is too.

Lenore had been diagnosed with Huntington's, a genetic and currently incurable neurodegenerative disease, in her 20s. She initially kept it a secret, even from her husband, until a few years ago.

"Since then, a few things started to make sense," says Steven. "One of the first things that starts to happen is that your personality starts to change because things in your brain start to change physically: she became less socially outward and her movement started to change.

As a result, she's lived in a nursing home for the last four years. When the family caught up at Easter, she had to return to hospital twice due to choking, a side effect of the disease.

"It was gut wrenching," says Steven. “So, at the end of last year, I was thinking that I wanted to do something to celebrate how good of a person that mum is, just to do something for families and people like her. Because it’s not just the person who is suffering from it, it’s also the impact on the people around them.

"My sister had done some fundraising for Huntingtons Queensland and I went for a run and thought maybe I could run four marathons next year, which was twice as many as I’d ever run in one year before. I left it for a week and that’s where the idea of running one marathon a month came about. It’s my way of doing something for mum and doing something for others."

There's another layer to Steven's story, however: his own struggles with mental health, something that stems from his genetic background.

"Both of my biological parents had severe mental health issues," he says. "I have a natural disposition towards anxiety and depression and it took me a long time to put my finger on that and to understand it.

“There was a point about five-and-a-half years ago where I hit absolute rock bottom. I used to go on these swings for about a month at a time and feel OK for weeks and then I’d have a shit week and just bottom out, just feel real low and take things in the wrong way. I went and saw someone for three or years and things would get better and then they’d get worse and you get really, really good at covering them up.

“Ironically, what I’ve found is the people who appear to be the most level-headed and calm on the exterior are probably going through absolute hell. It’s not surprising now, but the comment that most people say to me is, 'Shit, we would never have picked that.'

"It seems to me that the worse you feel, the better exterior you put on, which is awful in its own respect because someone could be brutally suffering right in front of you. It’s a charade."

Over time, he found exercise helped; in fact, he describes it as "my only real way out."

"I would run long distances because it would just drain me of all of this negativity," he adds, "and I’d come out the other side feeling pretty good about things."

Hence the Good Beer Run in Melbourne, which follows a similar successful event at WA Beer Week in November and provides a chance for other people to get involved in his fundraising drive.

“That’s the other side of this run that I really want to make clear: I’m doing this because exercise does make you feel good. In the beer industry, although we are getting better, people don’t necessarily link exercise and craft beer together. Exercising and beer drinking go hand in hand in my thinking, which is why I wanted to do this run at Good Beer Week. Why can’t you start the week with some exercise?

“Craft beer is about savouring and enjoyment and not necessarily drinking to excess. Running, on the other hand, needs discipline, it needs you to go, 'It’s Saturday night and I’ve gotta go for a long run in the morning.' I’m not going to not drink beer because I like drinking it but, if you’re drinking a saison or an imperial stout or a sour, I naturally don’t want to drink pints of that, I want to savour that flavour.

"I think they link beautifully together but there’s also nothing more I look forward to at the end of a really long run than a beer because I feel like I’ve earned it."

Which brings us to the event on May 13, the first Sunday of the biggest annual celebration of beer in Australia.

“During a casual chat on a Sunday morning long run in January, I was asked, 'Are you going to Good Beer Week, Blainey?' Well, of course I was, but the next question was, 'When are you planning on getting your May marathon out of the way?'

"That was a good question; I hadn’t actually thought that far ahead but, after some more chatting, we both agreed that we should just run one together at the start of Good Beer Week to offset the beer consumption."

The mission has continued to grow from the initial thoughts around four marathons in a year. Already in 2018 he's completed four, raising $4,000 towards his year end target of $10,000, which he's donating to Huntingtons Queensland, much of the money coming via sponsorship from breweries, beer retailers and venues, as well as individual donations. Now he's planning to end the year with a bang.

“I’ve never run an ultra-marathon before and at the end of the year is the Gold Coast Ultra-Marathon," he says. "I’d love to push Mum, if she’s able to, in a wheelchair for the last two kilometres.

"I’d be a blabbering mess but that would be one of the most rewarding experiences and finish the year off."

For more information or support surrounding mental health issues, you can contact:

The Good Beer Run is on May 13 and there is a variety of routes to suit participants of all ability levels. You can find out more and register to take part here.

The issue of mental health in the beer industry has previously been covered by Ale of a Time's Luke Robertson in an article for Good Beer Hunting. 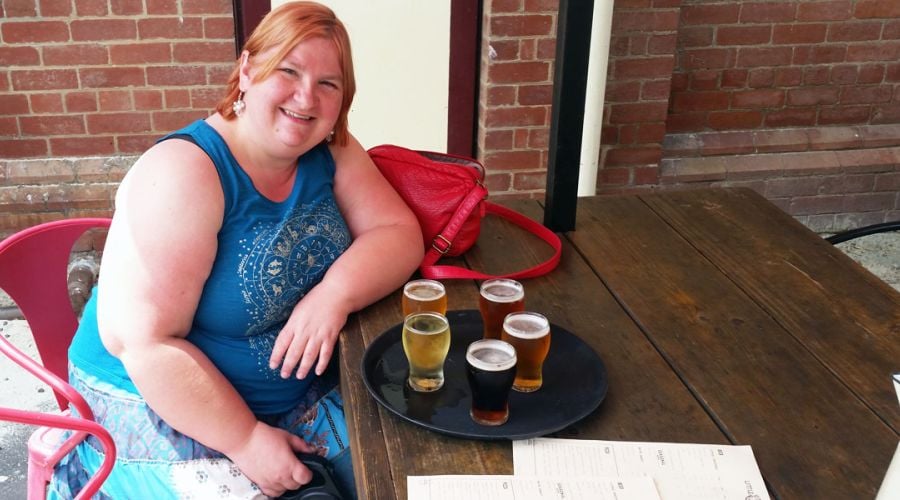