Back in the middle of 2016, we ran a feature on Tim Smith. He'd taken a rapid tumble down the rabbit hole, going from his first experiences of craft beer to running a blog, The Year In Beer, through which he was documenting his efforts to try a different beer every day for a year while enticing his wife, Cass, into the wide world of beer too.

It was a trip that was kickstarted by a first visit to the Grain Store in Newcastle and it's one that shows no sign of slowing. Last year, having returned to their hometown of Dubbo, the pair opened their own craft beer venue, The Monkey Bar, despite having backgrounds in civil engineering and psychology and having spent the years prior working for a construction company.

"Most people don’t know this but neither of us had worked or been involved in the hospitality industry before and we had never even pulled a beer before we bought the bar," says Tim. "It was deep end, head first, and we’re starting to swim now."

Not only are they starting to swim, but they decided to launch Dubbo's first craft beer festival, Beers To The Bush, in March too, featuring 17 independent brewers and cider producers.

"Each time we came back to visit family and friends, we noticed [Dubbo] was changing more and more," he says. "Awesome alternative cafés and little shops were opening up and we watched as the town started hosting some great events and showcasing a lot of local produce and artists. It was at that point we thought Dubbo was ready for what we had in mind."

What they had in mind was a dozen constantly rotating taps and a unique cocktail and food menu the likes of which they'd not seen locally. And, while craft beer had been making inroads before they opened The Monkey Bar, Tim and Cass started bringing in rare beers such as Founders Canadian Breakfast Stout as well as events like Juice Wars, the Hop Nation and 3 Ravens NEIPA face-off.

To emphasise the change they're looking to drive, Tim reckons 90 percent of the beers they’ve had on tap have never appeared this far into the state's west. Add in a canning machine for takeaways and around 80 beers and ciders in the fridge and you've got the sort of venue that would be welcomed in any Australian city.

All of which seem good reasons to welcome him back to the pages of The Crafty Pint to offer some insight into the beer scene in the Central West of New South Wales. What beer styles are proving popular with punters?

We’ve been really surprised how popular New England IPAs have been, especially considering the popularity of lagers out west. It was great to see the style embraced to a point where we could host Juice Wars, bringing something completely different to town for everyone to try.

With the summer heat we’ve also seen Welders Dog Ginger Beer extremely well received, which has been great to see.

What about staff – what are the top knockoff drinks at the end of shifts?

It really depends on what we have on tap at the time; the staff love the hoppier pale ales and KBS was a standout favourite after knockoff for the short time it was on tap last year.

Are you witnessing a change in tastes, even over the few months you've been open?

Most definitely. When we first opened, we kept Great Northern and Carlton Dry on tap – these are popular locally and we thought we’d be doing ourselves a disservice if we got rid of them straight away. These were also our most poured beers for the first few months up until Christmas.

As people have become more willing to try new things and see their palates broaden, we’ve now been able to take Carlton off tap and Northern is slowing down more and more.

Have there been any standout beers that blew away you and your customers?

There have been a couple for sure. KBS is one of them; Cass and I had had it before and knew it was unreal but it was the first time anyone had seen it locally and it blew everyone away who tried it.

3 Ravens Acid and Woolshed Brewery’s Hard Lemonade are also standout favourites with us and everyone that comes in.

What advice do you give to customers who are new to craft beer?

If people are unsure about something, ask. Don’t be afraid to try new things, it doesn’t matter if you don’t like it. The important thing is to understand what about it you do, or don’t, like so you can delve deeper and try different beers that you wouldn’t have otherwise tried. The best thing about craft beer is that there’s no real judgement from anyone about what you are tasting; as long as you keep tasting and develop your palate along the way there’s no losing out.

When someone comes to the bar and isn’t sure about what they like or have never tried craft beer before we pull out the glasses and let them taste whatever they like until they find something they like. By doing that, we are creating an environment where everyone feels that it’s perfectly fine to taste and then not feel obligated to grab a schooner of that particular beer. We’d rather they walk away with a drink they know they like, and that they’ll finish, rather than just tossing a coin and not liking it.

Especially given what we are trying to do in Dubbo, we don’t want people’s first experience with craft beer to be one that turns them away.

Where do you think beer is headed in your part of the world?

Beer is only on the up and up. We’ve just finished hosting Beers to the Bush (pictured above), Dubbo’s first craft beer festival, which was an outstanding success that we are planning to turn into an annual event. We had 17 independent breweries and cider makers from across the country converge on Dubbo for an awesome day of beer, live music and fun.

More and more people are willing to try different beers and are realising there is a lot more on offer than what has traditionally been out here, which is awesome to see! We’re humbled to be a part of bringing something different to the Central West.

Aside from The Monkey Bar, where else should beer fans head in your part of the world?

Beers to the Bush 2019! We’ve started planning it already and it’s going to be bigger and better than this year, we’ve learnt some great lessons which we’ll use to turn it into something us and Dubbo can be proud of.

Dubbo seems to be situated at the end of a craft beer trail that’s winding its way out of Sydney, with more and more breweries popping up along the way there’s no shortage of stops on your way out here.

Two Heads Brewing in Bathurst do a great job and their brewery is hugely inviting – with food vans and live music on the weekends you’d think you were back in the inner west of Sydney with the vibe they are creating. And, with Pioneer Brewing and Badlands Brewing on the next stop in Orange, you’re spoilt for choice before getting out to us in Dubbo.

You can check out the rest of our Behind Bars series here and can read more about the beer scene around Orange in this article.

There's been a fair bit focus on Ballarat recently, with the launch a Beer Trail and announcements of a $100m brewery project and a Brewing Centre of Excellence. Here, one of the city's barmen tells us what's happening on the ground. read on 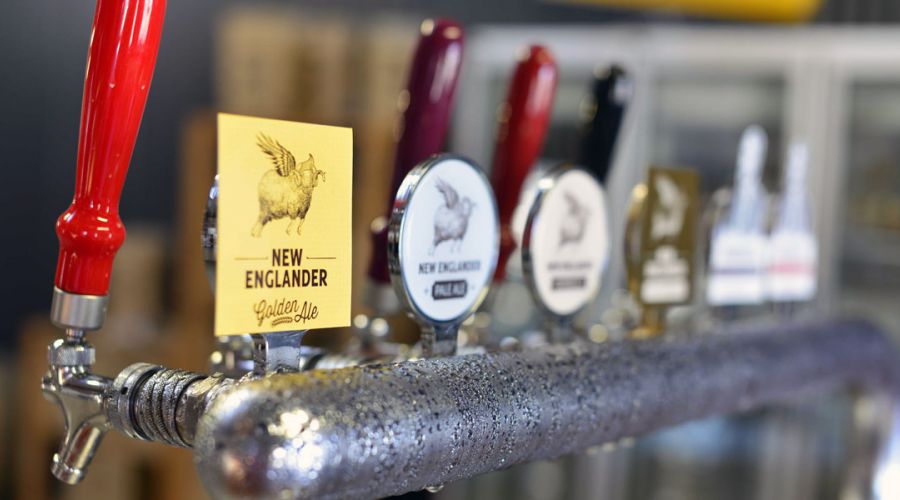 There aren't many areas of Australia without a microbrewery or two serving the locals. New England is no exception, as Matthew Taylor discovered when he toured the region. Already there are three, with a fourth on the way. read on