In the comic book world, there are two kinds of heroes.

There are the big impressive heroes who show up, save the world, and go home (think The Avengers). And then there are the heroes who deal with things where they live (think Daredevil and Spiderman).

They don’t save the world. Their lives aren’t glamourous. But they contend with the gritty details of life and deal with problems on the ground. They use whatever resources are available to look out for the people around them, and aim to have some influence for good in their little corner of the world.

In the world of good beer, Les Riddell is the second kind of hero.

Born and raised in Brisbane, Les started his career in booze in 1994 at the Pineapple Hotel bottleshop. And it was while he was employed there that he got his first taste of good beer – on a trip to Canada in 1997. It wasn’t a hop heavy IPA or a gutsy imperial stout, but a dark lager that gave him the itch. After tasting Hermann’s Dark Lager, by Vancouver Island Brewing, Les knew there was no going back.

Over the ensuing 15 years, his hunt for high quality beer sent him far and wide. He worked in bars at various mountain resorts in the US, using his downtime to taste the local flavours and take his snowboard to the slopes. When he returned to Australia (and finished his streak with a stint at Perisher Ski Resort), he dove headfirst into the craft beer industry, working sales for Murray’s, opening and managing The Local Taphouse in Darlinghurst, then taking the role of brewery door manager at Bright Brewery in Victoria.

Finally, Les returned to his hometown in 2012, armed with a glut of knowledge and experience in the world of good beer.

It just so happened that the owners of The Pineapple Hotel, the Singleton family, were keen to open Craft Wine Store – a bottle shop with an ethos of selling mostly organic, biodynamic and natural wines. And, as it only made sense for their beer offerings to be of a similarly high quality, they brought their old pal Les in from day one as their Craft Beer Consultant.

“The prospect of working with the family again and being given full creative control over the beer selection at Craft was an exciting opportunity,” says Les. And it was here that he began to develop a reputation as a cornerstone of the good beer scene in Brisbane.

In terms of craft beer, although Brisbane was growing, it was still very much in its infancy. But Les took up the mantle of sharing good beer with the people around him. The selection of international and domestic beers became so impressive that it was common for someone searching for a particular beer to be asked: "Have you tried Craft at Red Hill?"

Les didn't only use his role to benefit the consumers, though. With the bigger picture in mind, he sought to contribute to the Brisbane beer scene as a whole. As each passing year saw more breweries opening in Queensland, Les took it upon himself to champion the local brewers – the ones providing fresh, high quality product and challenging the status quo of the commercial beer industry. While still stocking beers from elsewhere, Les started giving prominence to local product.

Local beers would often feature in the weekly tastings, secure at least one of the taps at the growler fill station, and find their way into mixed six-packs, thus encouraging people to sample product from the nearby breweries. Even interstate breweries came second where prime fridge space was involved.

“There’s so much great beer being brewed in South East Queensland," he says. "That’s become my focus – to really give the opportunity to local brewers to have an audience and get their beers in the fridge. Quite often over the last couple of years, I’ve said to southern brewers, ‘What am I supposed to take out of the fridge to put your [beers] in?’”

As business owners know, a manager with a finger on the pulse of their industry is worth their weight in gold. The ever-evolving beer industry is no exception, and Les’ employers were smart enough to trust and value his insight.

“Seeing the success of Craft, and the beer in particular doing quite well, I opened my big mouth one day and said [to my employers], ‘You should open a craft beer bar’,” says Les.

So they did. And put Les in charge of it.

In October 2017, one of the bars within the Pineapple Hotel was reopened as Helsby’s Ale House. The old pub aesthetic is a restoration of the past decor (think vintage ads, oil paintings, leather armchairs and timber floors), and the name is a nod to one of the old long-term inhabitants of the hotel. But the direction of the bar is fresh – Les has brought his guiding principles to Helsby’s, and it certainly shows in the 16 taps of Australian beers, with a sharp focus on local and independent.

“I pretty much get free rein to choose the beers,” he says. “Everything on this side of the wall [ie within Helsby’s] is totally up to me. This is probably the first time in its existence that there hasn’t been XXXX on tap in this front bar!”

It’s normal for small Queensland breweries to take up at least half of the the blackboard tap list that looms over the patrons.

“Originally I thought six brews from Queensland and the other ten taps would rotate two beers each from each state. And, with our opening tap list, that’s the way it looked. But, as I say, there’s so much great beer being brewed in South East Queensland."

Once a month, Helsby’s hosts a Brewery Showcase night, bringing in the brewer from one of the local breweries for a night of interviews, Q&A and, of course, beer tasting. Green Beacon, Newstead Brewing, Black Hops Brewing and Ballistic Beer Co have already featured. These nights are part education, part community engagement and part passion project for all involved.

The slogan of Helsby’s is simply: "The Good Beer Place". But what sounds so simple is actually very intentionally-wielded language.

“From the beginning, I was really clear in saying I don’t want to use the term ‘craft beer’ in any of our marketing or advertising,” says Les.

He said that the term, while it was useful in defining what was happening in Brisbane five years ago, has become second-hand, particularly with the "craft" offerings of the big commercial players.

“I want it to be ‘independent beer’, or ‘better beer’, or ‘good beer’," he says. "That’s what I’m really interested in –offering good beer.”

Since returning to Brisbane in 2012, Les has been pleased with the changes he’s seen in the local beer scene.

“The proliferation of breweries opening in South East Queensland has been the most noticeable thing. The quality of the beer being produced in our neck of the woods cannot be denied. And there’s certainly been growth in the opening of venues where good beer is the norm rather than the exception.

“Interest in better beer is at an all time high and that's a very good thing," he adds. "It's never been a better time to be a beer lover living in South East Queensland.”

Les isn’t one to boast about the part he’s played in growing that culture. He doesn’t seek the spotlight; in fact, he avoids it. But, behind the scenes, he’s been something of a sounding board and mentor – “Giver of bullshit advice”, in his own words – to many people within the industry, including being asked to be on the advisory panel for the inaugural Beeries Awards. For all his experience and contributions, he’s the kind who shrugs off any praise.

And this sums Les up nicely. In one sense, there’s nothing impressive about what he does. He’s one of many who loves good beer, works hard to provide it to the people, and enjoys being on the front line of the ever-growing scene.

But he takes the initiative to grow the beer community in his city. He makes tough decisions for the sake of the "little guys". He quietly uses his sphere of influence to ensure Brisbanites get the best beer possible, both now and in the future.

That makes him a hero in the beer world.

Thanks to Les for agreeing to a little bit of a spotlight here. You can check out other Craft Beer Heroes features here.

You can also immerse yourself in Queensland brews at Helsby's throughout Brewsvegas as it hosts Pint of Origin Queensland. And, if you're a Crafty Cabal member (or mates with one), you can join Les, Adam from White Brick Brewing and Will from this parish for a beery brunch on the closing Saturday of the festival too.

About the author: Mick Wust writes fun and dumb things about beer at Schoonerversity, and is a freelance copywriter at We Write You. 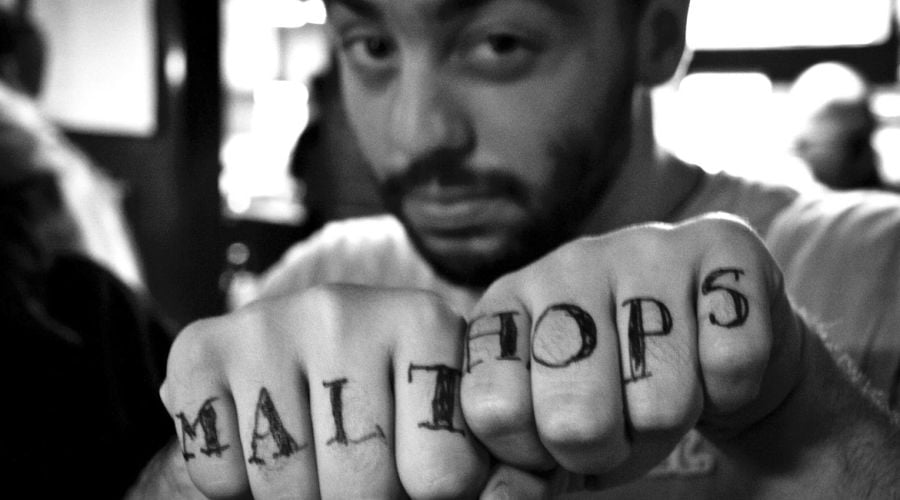 From fermenting pumpkins at home and homebrewing with his brother via Malt Shovel to heading up New Zealand Hops, Doug Donelan has lived his life in beer. We sat down with him as he starts looking forward to retirement. read on Who Brews In The Happy Valley?

Happy Valley is a brewery built for locals in the Brisbane suburb of Stafford, with a name stemming from the locale's original name. We caught up with the team to ask Who Brews Happy Valley beers? read on