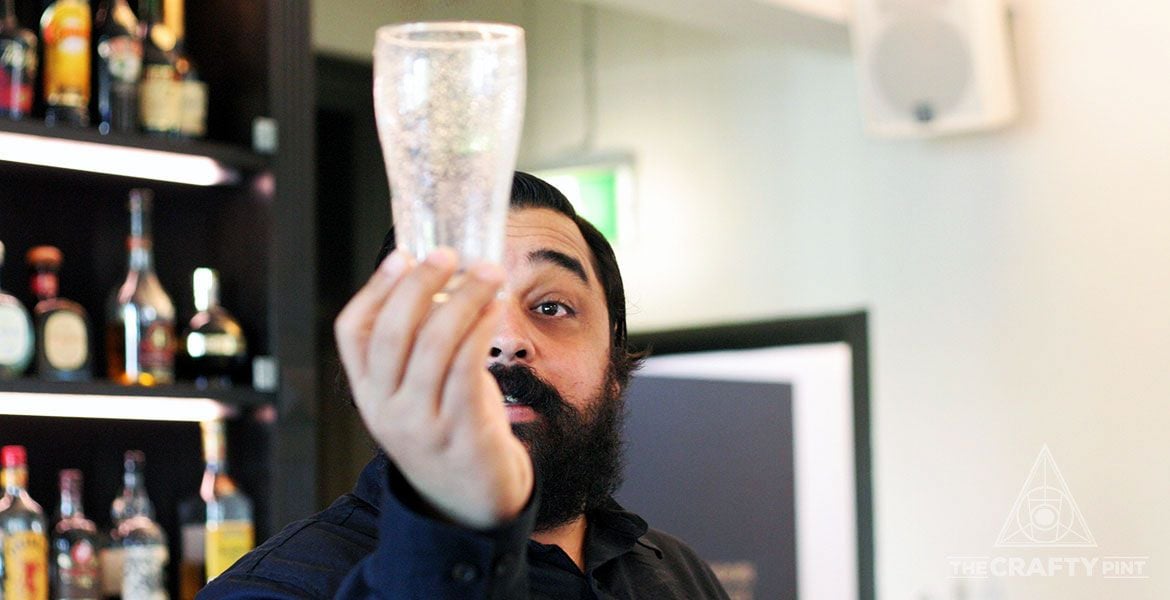 Anyone who has enjoyed a craft beer in Sydney has likely crossed paths with the ever-smiling and gregarious figure that is Liam Pereira. He’s worked in an impressive variety of beer-related roles over the years, most recently as co-owner of Dave’s Travel and Events. Even here his job description covers many facets – tour guide, beer educator and event organiser, with the last of those including the rather substantial task of running this year’s Sydney Beer Week.

His journey into Australia’s beer world began upon his return from the UK in 2009, when he worked as bar manager at the Pumphouse, one of Sydney’s earliest large scale craft beer venues. After that, he ventured into the bottleshop trade, working as manager for the Kingston Road and then Parramatta Road branches of Camperdown Cellars; the latter was named the Top NSW Liquor Store in 2014.

Those with less refined memories may instead remember him behind the bar at Batch Brewing Company, or perhaps as an event host for Time Out’s (now defunct) Bottled Lightning Co.

However, the most enticing thing about Liam is not the sheer amount of roles he’s inhabited, as impressive as that is. It’s the fact that, despite his experience and education – he’s a Certified Cicerone after all – he remains non-judgmental about a person’s beer tastes or knowledge. He’s just out to spread the love of beer in every way he can, just as happy to have a chat with a newbie starting to work their way out of macro lagers as he is to talk to a beer geek about sours and IPAs.

In short, He's an ideal candidate for a Craft Beer Heroes feature. So, with Sydney Beer Week just a couple of months away, here's Liam in his own words…

These days, in a few different ways. I work as General Manager for Sydney Beer Week, take people on tours as a guide with Dave’s Brewery Tours, host events featuring local beer with Dave’s Events, educate the beer industry and consumers with The Institute of Beer, talk all things beer on Sessionable Podcast and host Ale Stars at the Local Taphouse in Sydney with Doc and Tom.

I was drawn to beer because it just seemed to have such a rich history, yet at the same time was still new and its fate was largely unwritten. While working in hospitality, there was a point where I had to choose between going towards either wine or beer. Wine just seemed so strict, formal and pompous. Beer, on the other hand, was starting to find its feet.

In Australia, we were seeing beers from the likes of BrewDog, Mikkeller and Nøgne Ø, so it felt like something young, vibrant and fun. That, and I’m just a nerd and beer seemed like a fun thing to nerd out on!

My first beer job was when I was in London in 2008. I scored a job at a pub called the Pavilion End in Bank, right in the financial district right near St Paul's Cathedral. It was owned by Marston's Brewery and had a big focus on real cask ale. For me, it opened my eyes on what beer could be.

Before that, all I knew about was mass produced pale lagers. Then, all of a sudden, I was working in a bar that had four rotating hand pumps and serving beers such as Staropramen from the Czech Republic (I still love that beer). It was there that I actually thought beer was something I wanted to learn more about.

To answer a quote with a quote, as Hunter Thompson stated: “Good people drink good beer.”

It would be when I found out that I passed the Certified Cicerone exam. The lead-up and study for that exam were an awesome and intense journey. I think I started the process with a fairly healthy beer knowledge but I came out of that knowing so much more, but more importantly, knowing how much I don’t know.

In a world where everyone on the internet is a self-described beer expert, knowing that you perhaps don’t know everything is a good thing.

Any place where I could sit at the bar, have a good chat to whoever is behind it, and where all the beers on tap are fresh, tasty and interesting.

It’s all about the balance and interplay between all four of them. Like many, there was a time where it was all about the hops. Right now, yeast is the one that interests me most.

That would be tricky – restricting me to just one minute of conversation on the topic of beer is a near impossible task! I suppose I would just let them loose during Sydney Beer Week.

It’s not so much about finding someone’s perfect beer, but rather changing their perception of what beer can be. I would go with Sourpuss from Wayward Brewing Co, Elsie the Milk Stout from Batch Brewing Company and Saison Dupont.

Thanks, Liam. Best of luck with your first Sydney Beer Week.

You can check out other Craft Beer Heroes here – and feel free to suggest people you think we should feature in future articles too.

For many beer lovers and brewers, there is one Aussie beer bar that stands above the rest: Adelaide's Wheatsheaf Hotel. Its owners star as our latest Craft Beer Heroes. read on Craft Beer Heroes is a series that shines a spotlight on people doing great things for beer in Australia, including the unsung heroes. Kate Paterson is truly one of those: you may never have heard of her, but she's probably given you a good time. read on