As soaring housing prices continue to cripple anyone hoping to own their own home, Melburnians are putting their roots down further and further away from the CBD. It's leading to the transformation of many areas of the city – often transformations that involve more cafés, bars and restaurants. And you could argue that no suburb represents the continual expansion of Melbourne’s nightlife than Preston in the city’s outer north.

When Courtney Barnett released the rather fraught track Depreston early in 2015, Preston was already starting to show off its new face. Since then, the sort of venues that have long made its southern siblings of Thornbury and Northcote so desirable have become well and truly established in Preston.

Only a few short years ago, Bell Street – the suburb’s main artery – acted as a craft beer Berlin Wall between Preston’s north and south, holding back the luxury of choice. But today the people of postcode 3072 – and anyone visiting – have no shortage of options when it comes to craft beer, no matter what side of Bell they find themselves on.

Stop One: Tallboy and Moose

Tallboy and Moose is the southernmost of Preston’s beer destinations and it’s unlikely there’s a better place to start a crafty crawl than the suburb’s very own brewpub. Since opening late in October 2016, Tallboy and Moose have become a fixture in Preston’s growing craft beer scene.

The spacious beer hall is full of large share tables, barrels and plenty of bar space to enjoy the beers brewed a few metres away. Those beers range from the brewery’s more accessible options, to more experimental limited releases which are often made in collaboration with other breweries or bars.

For anyone hoping to end at the crawl’s beginning there and take a few beers home, there’s CANimals can be filled fresh to order. Crafty Cabal Member offer at Tallboy and Moose: Free Fifth Taster At Tallboy and Moose

Tallboy and Moose is at 270 Raglan Street.

No night out in Preston should miss out a visit to Raccoon Club, the suburb’s craft beer pioneers. When the venue first opened its doors back in 2011, Racoon Club was a craft beer oasis in an otherwise hop-free desert. The bar quickly became a regular haunt for Preston locals, presumably thanks to its staff’s relaxed attitude and no dickheads policy.

Since those early days, the bar itself has only changed for the better; having started with just three taps, they now pour from ten. Half of these are always pouring some local favourites (apparently 2 Brothers' Grizz has been on tap since day one) with the other five rotating regularly.

Hoping to keep the carbon footprint as low as possible, those beers – along with all the wine – are only ever Victorian in origin.

Raccoon Club is at 145 Plenty Road.

Dexter specialises in decidedly non-traditional barbecued meats, including the likes of Hot Meat Donuts and Pig's Head Croquettes. And, as more and more restaurants are releasing, with good food, you need good beer.

The bar’s three taps change frequently and, while they have no rules regarding provenance, Victorian craft beers feature heavily. Considering the bar’s proximity to the likes of Hawkers and 3 Ravens, fresh kegs from those breweries are poured regularly.

With meat such a focus, the beers regularly stocked at the bar are usually chosen to match Dexter’s hearty food. Thus beers with a strong malt backbone that pair well with richer dishes often appear alongside the local pales and lagers needed to wash away each indulgence.

Taking up residence inside a former panel beater’s, Stray Neighbour is equal parts bar and restaurant, with the dining area (and menu) further proof there’s no shortage of fine experiences this far north.

For anyone more interested in just drinking, the large, astroturfed beer garden out the front or booths by the pool table make perfect spots in which to settle into a session.

Diners and drinkers can choose from the bar’s 12 taps, which are poured through custom designed, dog-head taps. The beer itself runs the whole gamut of Australian craft beer, from some of the country’s finer craft lagers to impressive barrel aged choices.

Hard Rubbish can be found quite literally on Preston’s edge; if the bar owners had located the bar on the other side of the street, it’s home would be in Reservoir. Started by siblings Charlotte and James Tizzard, when Hard Rubbish opened it seemed to have Melbourne’s ageing hipster population firmly in its mind: as more and more make their way further out, the good beer tends to follow them

Assuming your lounge room is actually a fun place to hang out, Hard Rubbish feels a little like an extension of that. Its name stems from how most of the bar’s furniture was sourced, with upcycling, recycling and a whole lot of welding playing an integral part.

When it first opened, a lonely tap poured beer, while the rest of the beer list was filled out by the bar’s extensive bottle list. That sole tap has since been joined by an extra three, with pales and IPAs frequently found alongside sours and coffee porters.

Hard Rubbish is at 670 Plenty Road

If you're keen to add a sixth stop to the Crawl, you'll have to make a little more effort as Audacious Monk is a couple of kilometres to the west (indeed, we hadn't realised it was still within Preston's boundaries when first posting this article...). It's another venue pushing the good word and, fittingly for the final entry, it's both bottleshop and bar, so anyone thinking it’s time their night ended can pick up a few bottles to enjoy at home.

If takeaways are the main interest, the bottleshop side of the business is focused strongly on Victorian craft beer, with a particular level of attention given towards the state’s youngest and smallest operators. Their wine display shows a similar devotion to the Australia’s small scale producers, both Victorian and those from interstate.

Anyone planning on staying inside the bar will find two taps on constant rotation. There's a flat rate corkage fee on all beer and wine if you want to pull something off a shelf or from a fridge to drink in. In summer, the patio style beer garden out the back is a particularly fitting place to enjoy a sun-drenched afternoon.

Other crafty spots nearby

Loray Vine and Tap – A wine bar on High Street with a focus on good beer too, both across its rotating taps and small packaged selection, that's been hosting monthly beer events since opening in 2017.

3 Ravens – Another of Melbourne’s north’s earliest breweries, 3 Ravens' bar is open few nights a week now with ten taps pouring its beers alongside those of sibling operation Mash.  Crafty Cabal Member offer at 3 Ravens: Our Shout

You can check out our previous Crafty Crawls here, including the first we ever ran, along the 86 tram, which segues perfectly into this one. 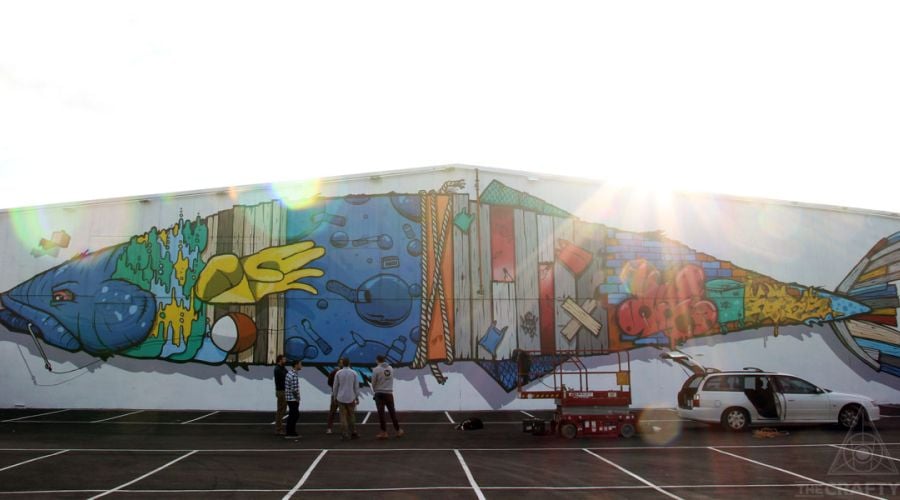 Melbourne's Moon Dog have helped shape the local beer industry over the past eight years. As they prepare to open their outrageous new brewery venue, Moon Dog World, we joined the founders for a trip down Memory Lane. read on

Unlike many of the previous Crafty Crawls we've run, this one requires you to cover a little more distance to complete. But it's worth the effort as Geelong's fledgling craft beer scene is becoming a fun one to explore. read on Two years on from publishing our Crafty Crawl guide to Sydney's Inner West, things have grown so fast we're having to revisit it. Here's a new hyper-local one focused on Marrickville with a broader Crafty Sprawl to follow. read on