Beer Nuts is our semi-regular feature focusing on people taking their love of beer to extreme levels. People such as Matt Kirkey, a Canadian who moved to the warmer climes of Australia a few years ago.

Earlier this year, the 35-year-old quit his job this year to travel the world interviewing beer people and trying brews for an upcoming beer book, Beer Around The World. Outside of researching for his latest project, Matt has worked his way through hundreds of individual beers and, as anyone who has met him will tell you, he's all too happy to pass his enthusiasm on to others.

Unemployed (quit my job to travel around the world for six months drinking beer and interviewing brewers). Normally a product manager/business analyst/consultant for tech stuff – feel free to sing out if you're hiring!

Are you a beer nerd, geek, aficionado, snob, wanker or something else entirely?

I'd go with huge craft beer fan. I love craft beer and I want to share as much excitement and knowledge as possible with people who don't know how awesome it is. I've seen plenty of beer snobs (and even brewers) be completely rude to someone who orders a Carlton (or equivalent).

Education, respect and taking people on a journey is how we grow the industry and keep making amazing beers. Making someone feel small for ordering what they're used to is a good way to scare them off craft beer and only furthers macro beer's domination.

How long have you been afflicted with the love of good beer?

I'm a bit of a late bloomer, [as I] didn't really get into good beer until I was 23, although that's a combination of not having good beer available in most of Canada thanks to legislation and my first experience drinking beer. A word of advice: 12 Molson Canadians equals a three day hangover.

When I first discovered proper beer (read: not Molson Canadian) in Germany on a trip in 2008. Flavour! Freshness! Culture! Blew my freaking mind. I didn't know beer could be that good.

When I was living in Vancouver, I’d frequently go to Seattle and Portland and try all these beers with heaps of flavour unlike anything we could get in Canada (IPAs, stouts). Turning point was the International Organic Brewers Festival in Portland in 2009. Then the final nail in the coffin was when I moved to Australia in 2012. My god, we've got amazing beer down here.

I suppose quitting my job in May to travel around the world, interview craft brewers and write a book about the business of craft beer would probably qualify.

Yes, although only when I remember to. I use Untappd; feel free to track me down.

I have had a crazy amount of amazing beer during my trip. Standouts include:

I had the worst beer in my life in Vancouver. It was a raspberry wheat ale and it made cough syrup taste amazing.

I own a Chang and Singha shirt that I bought when I went to Thailand in 2012, solely because they were cheap, not because they were beer shirts. Rick Chapman from Coronado gave me a Coronado hoodie which singlehandedly kept me from freezing to death when I extended the trip and went to Iceland, Denmark, Sweden in the Fall (I had only packed one long sleeve shirt). I think I have a few GABS t-shirts from volunteering as well somewhere.

Zero, although I am looking at getting a couple once I find a place to live. That said, I'm not super obsessed with having "proper' glassware.

I'm looking for a new place to call home, but I do homebrew so hopefully a nice garage where I'd be able to brew and then cellar a few nice bottles of beer away. I generally have a once-a-year party where all my friends who love beer come and we bring five to ten bottles of nice stuff each.

How many unique beers do you think you've consumed?

According to Untappd, I'm at 555 that I've remembered to check in. Lifetime I’m at least triple that number, maybe even quadruple.

I don’t think I’ll ever have a dream beer. My tastes change usually yearly. In 2013, it was wheat beer; 2014 was pale ales; 2015 stouts and porters; 2016 was the year of sours and fruit beer. Maybe 2017 will be the year I finally get into IPAs. For me, it’s all about balance between hops, ABV and malt, no matter the style.

What have been the highlights of your beer book tour? Any particularly memorable moments when interviewing people?

I’ve been completely blown away by how welcoming everyone has been, especially given I have zero history writing or interviewing. Highlights include meeting Steve Wagner – such a legend and went out of his way to connect me with a few brewers in San Diego whilst I was visiting.

Rick Chapman from Coronado spent an entire afternoon with me and introduced me to nearly everyone who works at Coronado. Jen Beauchesne and Matt O’Hara from Beau’s All Natural also took an entire afternoon (and evening!) off – Vankleek Hill’s Two Spoons Pizza is a must if you’re visiting.

Tasting beer from the $1000 bottle of beer from Storm Brewing with some hot scotchy chasers.

I loved interviewing Tore [Gytner] from To Øl (absolute legend) and getting to try some of the experimental beers straight from their new fermenters. Finding out that Mario from Crew Republic in Germany and I went to the same university in Canada at the same time (he was on an exchange).

Running into Dan Johnson when I was interviewing Matt Johnston and Ryan Marrow from Collective Arts (can’t wait to get their beers down here). Connecting Skip Virgilio (original AleSmith) with Andy Moffat (Redemption Brewing) for a cross-continental collaboration. I could go on and on.

The community is really open and it was very inspiring to see how they go out of their way to help each other.

What's the next step for the book?

Actually writing it. I’ve got the outline of the book pretty much done, but now the hard part – filling it in. I have over 40 hours of interviews that I’d like to do a blog post for each brewer/owner on a lesson learned or a novel business model/practice.

I’ve got a heap of knowledge about the industry now, but I’m keen to put it to practice and see if it’s accurate. I’d also like to get over to Japan and New Zealand and conduct some interviews there, so we’ll see if I can’t squeeze in a couple extra stops before I complete the book. That said, if any brewers or founders want to chat, sing out. Happy to give you some advice and help if I can.

Thanks Matt! If you're keen to keep an eye on his literary adventures you can follow the Facebook page here. Or if you're interested in reading about our other Beer Nuts, the whole archive can be found here.

If you know someone who would qualify as a Beer Nut, get in touch and let us know. When it comes to dedication to the cause, you'll find few who can top Michael Doulton. For our latest Beer Nuts feature, Matt King steps inside one of the more remarkable beer caves you're ever likely to see. read on At Brewsvegas 2018, the inaugural running of the Brewniverse Pageant took place. The aim was to crown a beer king or queen of Brisbane and the winner was Ben Costin. We find out more about him as part of our Beer Nuts series. read on 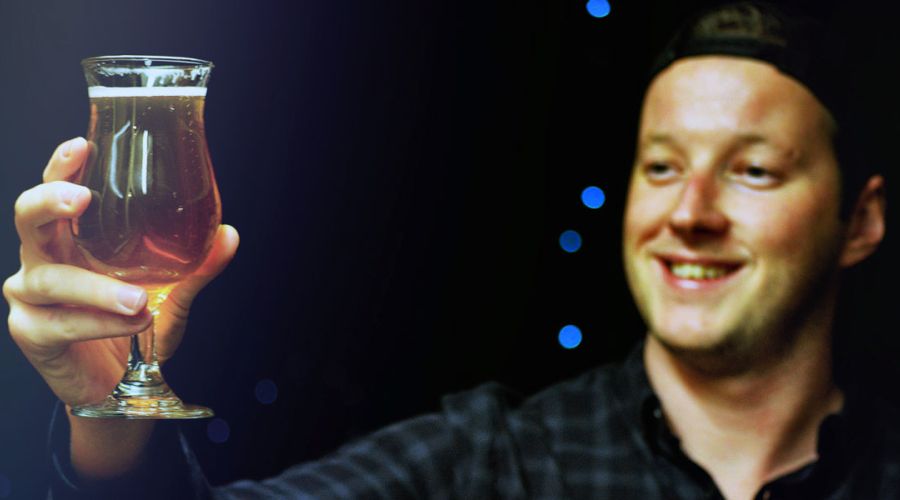 The results of the Hottest 100 Aussie Craft Beer Polls are always highly anticipated. For one man, the 2015 announcement became the start of a mission. read on