It’s the 1820s: Four convicts from Sydney are the first westerners to stumble upon the Brisbane River after bad weather seriously messes with their navigation.

Fast forward more than a century to the 1930s: The Howard Smith Wharves and the Story Bridge are constructed to provide relief work during the Depression years.

Take another leap in time to 2018: Felons Brewing Co opens in the Howard Smith Wharves precinct under the Story Bridge, named for the quartet that found themselves on the river almost two centuries earlier.

Whether you care for the nod to history or not, it’s hard to be anything other than wowed by Felons. Their stated goal is to become part of Brisbane's culture – “a brewery for the people of the local community to call their own” – and the spot in which they're brewing beers set to make their way across the city and its festivals then further afield through 2019 certainly helps.

Drinking beer fresh from the source is always special, but the location here pushes the experience to a new high: the sparkle and ripple of the river; the criss-crossed girders of the Story Bridge reaching overhead; the monumental rocky cliffs watching over the buildings; the skyscrapers of Brisbane silhouetted against the sky.

The heritage-listed Howard Smith Wharves, which lay abandoned for so many years, is now an entertainment and dining precinct that can hold its own on the world stage. And at the heart of it all? The Felons brewery, which takes centre stage within a 1000m² venue offering an array of drinking and dining experiences all on its own.

Head brewer Tom Champion, one a few team members with Little Creatures pedigree on his CV, says his goal is to make “beautiful, balanced beers and cider of no fuss.” Good for people who might not have visited an independent brewery before. Good for people who appreciate high quality beer. Good for anyone in the Queensland climate.

As for the wider Felons experience, perhaps the most obvious is out on the deck: looking out over the Brown Snake with a Crisp Lager and a burger, can you get more Brisbane than that?

Or you might choose to sit inside, beneath the wooden trusses of the original wharf structure. Sip on an IPA that was poured from one of the four serving tanks behind the bar (named Pamphlett, Parsons, Finnegan, and Thompson after the four felons themselves) and order yourself a pizza. When the kitchen has two wood-fired pizza ovens, kept at different temperatures for different bases, you know they’re dishing up the good stuff.

To get the full brewery experience, you can wander right up to the brewing tanks, cold Middy in hand, and chat with the brewers about the 25hL four-vessel system and the brewing process. There’s also the option to go on one of the daily brewery tours, wander the labyrinth of stainless steel tanks, and watch the bottles whizz past on the packaging line.

The courtyard out the back is the ideal spot for a sparkling Sonny Cider paired with chargrilled broccolini and whipped cod roe. When you’re sitting out there on a wooden bench, among the flagstones, bougainvillea and olive trees, you’d swear you were in the Mediterranean.

But you can always return to Australia by popping around the corner to the open parkland. Sit on the grass, savour an Australian Pale Ale in the sun, and rip into a bucket of prawns or some fish and chips wrapped in paper.

It’s always refreshing to see people making beer without taking themselves too seriously, and that’s Felons in a nutshell. As general manager Ash Cranston says: “Beer’s fun. We want to be out there showing people that beer is a lot of fun.” One way to do that has been to convert a firetruck into a beer truck and nickname it Boss. Because why not?

Felons hasn’t wasted any time becoming an iconic Brisbane experience. From celebrating Brisbane history to celebrating Brisbane art (just wait til you see the old wooden trawler that’s become a canvas for Anthony Lister). From being a destination for visitors to our city to a local watering hole for all kinds of Brisbanites. From serving beer all around the venue (56 taps in total), to serving beer from a firetruck.

Whether you’re drinking a lager or an IPA; whether you’re eating a Grilled Angus Short Rib at a table inside or fish and chips on the grass; whether you’re looking at a river, a firetruck, an olive tree, an old boat, or a line of stainless steel brewing tanks…

Welcome to Felons. It’s kind of a big deal.

Seven days: 11am til late Head brewer Tom Champion has said that he’s “fiercely proud of the Australian beer industry, including the ingredients and suppliers that fuel our industry and move it forward”. It’s only natural, then, that at least one of Felons’ beers would be made from all Australian ingredients. Pale, Vienna, Cara and Wheat from Barrett Burston Malting make up the grain bill, while Vic Secret and Galaxy bring a whole lot of fruity flavours to the table. The Australian Pale Ale’s naturally cloudy… Read more
Golden Yellow The Felons team have said from the beginning: “We want to get under the skin of Brisbane.” A crucial part of that was always going to be providing a solid lager – an alternative to the Four Letter Word coming out of Milton. Their Crisp Lager’s styled on a Munich Helles, built on 100 percent Pilsner malt and featuring plenty of noble hops – but it isn’t bound to tradition; Felons have also added newer German hop varieties Mandarina Bavaria and Hüll Melon to the mix to bring their lager… Read more
Pale Yellow 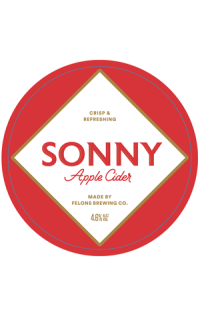 Intent on producing cider that matched the quality of their beer, the Felons team did their homework: they did cider tastings, made pilot batches, trialled different juices, and eventually landed on one from Stanthorpe and a recipe they were proud of. Rather than going down the sugary-juicy end of the cider spectrum, they decided to make a sparkling cider that looked and felt like drinking champagne. Its bright, light lemon colouring is mesmerising, with champagne yeast and high carbonation bringing… Read more
Pale Yellow Variety in beers is fantastic. New experimental styles are fantastic. Huge, bold, blow-your-head-off flavours are fantastic. But none of these things does away with the need for flavoursome, straight-down-the-line, super drinkable IPAs. Felons want to make “Beautiful, balanced beers of no fuss,” and their IPA hits the mark. There are no citrus fruits, special enzymes, hazing agents or milk sugars added to this beer. Hops from all over the globe show aromas of pineapple, grapefruit and stonefruit,… Read more
Golden When you visit Felons, it’s easy to have all of your attention fall on the panoramic view of the river. But walk through to the other side and you’re in a beer garden that feels like less like Brisbane city than it does Italian countryside - bursting pink bougainvillea, silvery olive trees and faded grey flagstones take you to the courtyard of a trattoria somewhere in Tuscany, where well-dressed waiters bring sparkling mineral water and lively aperitifs to your table. In this courtyard, even… Read more
Golden Yellow 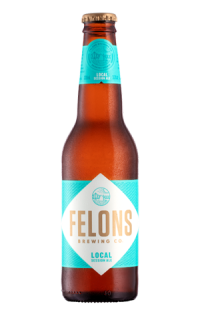 Brisbane is starting to develop a reputation as the City of Lights, and it’s a nickname that doesn’t require much explanation – come anywhere near the river at night and you’ll see bridges, walkways, trees and buildings lit with different colours and patterns. It’s certainly a more romantic association for the Brisbane River than the beloved moniker of the Brown Snake. Felons Brewing’s Local Ale is a beer of lights: a light pastel yellow colour, a light but heady scent of citrus blossoms… Read more
Pale Yellow Brewsvegas launched in 2014 as Brisbane’s annual ten day celebration of all things good beer. It's a not-for-profit that relies on sponsorship and a ton of volunteer help and goodwill, with everyone involved a lover of beer, Brisbane, and the city’s beer community. Their annual collaboration brew partners are no exception, and in 2020 the official Brewsvegas beer has been created with Felons Brewing Co. Felons have only been brewing beer under the Story Bridge in Brisbane for a little over a… Read more
Pale Yellow

Launching at Beers On The Lawn on Feb 22

Then available city-wide up to and throughout Brewsvegas The last couple of years have seen a surge of wine flavours make their way into beer, whether it be from wine barrels, beer-wine hybrid styles, wine yeasts, or vinous hops. Felons Brewing’s Champagne Sour uses the latter two, and captures the taste of a sparkling wine without ever touching any grapes or wine. While this is called Champagne Sour, the “sour” is more about the method and style than flavour description - this beer has been kettle soured, but is only meant to be sharp enough to… Read more
Golden Yellow With Brisbane’s brief spring fast approaching, the Felons are getting their last licks of winter in with a classic Belgian-inspired dark beer. The Dubbel pays homage to the patron saint of beer, Saint Arnold, who saved lives during the medieval era by insisting people drink beer as opposed to disease-ridden water. Fortunately, that kind of motivation isn’t required to sample this particular drop. A love letter to the Trappists, the Dubbel is a deep russet in colour with a caramel head. Felon’s… Read more
Rich Brown

Pouring at the Felons brewpub Only available at Felons

Brisbane’s Felons might have a core range led by beers designed to be recognisable and approachable for the many who walk through its doors. But, while it's early days, if the brewery’s limited releases are anything to go by, we can look forward to offerings of a more unusual, beer nerd-friendly nature in the future. First up was a blueberry gose and, for Brewsvegas, the brewers on the Howard Smith Wharves created a hazy IPA. It's only a slight haze, at least compared to many of its turbid brethren,… Read more
Golden Yellow Plonked firmly in the shadow of the Story Bridge, Felons Brewing Co. was always going to attract a pretty diverse crowd. Only a short stroll from the CBD and occupying the shore on arguably one of the more scenic points of the beautiful brown Brisbane River, the brewery happily caters to a mix of tourists, tie-wearers, and those who would just like to drink a nice beer somewhere nice — the same mix of punters at which Felons have aimed their first seasonal release, the Blueberry Gose. Brewed with… Read more
Red This mid-strength probably isn’t what you were expecting. Is it an ale? Is it a lager? No, it’s a California Common, a hybrid style that uses a lager yeast, but fermented at a warmer ale temperature. Although this is the lowest alcohol beer of the Felons core range, it’s also the darkest in colour. The Middy shines with lovely copper tones, thanks to the addition of some Carared malt in the grain bill, which also adds notes of caramel. While this style calls for gentle aromas and flavours,… Read more
Golden