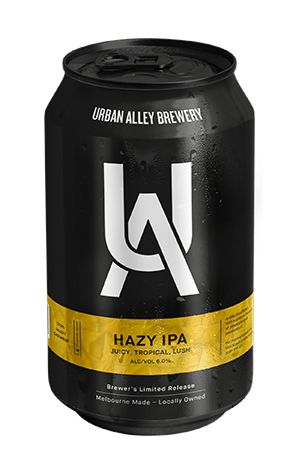 Urban Alley’s Brewer’s Limited Release beers have taken the Docklands brewery in many directions: lacing sours with fruits; slowly ageing beers in barrels, for example. But for their November 2021 Hazy IPA, the mantra has been a simple one of no twists or novelties: just big flavours delivered by hops alone.

The hops in question are the kind of trio that does wonders in a modern hazy, with Citra, Galaxy and Cashmere providing a broad sweep of tropical flavours. Pick the beer apart and you have a sticky, ripe mango, passionfruit, pineapple and melon that sits somewhere between honeydew and the whiter parts of a watermelon. Having said that, there’s no need to pick Hazy IPA apart too much, as the beer’s silky mouthfeel and lush body mean the 6 percent ABV beer is drinkable enough you'll more likely to be pondering picking up another.