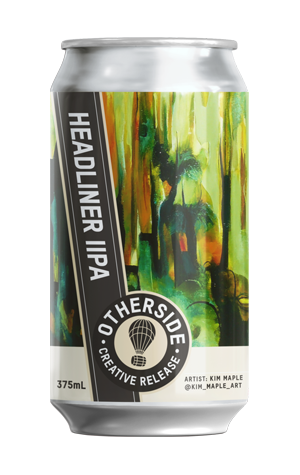 Otherside’s annual Headliner limited release has become one of their most anticipated, even amid the heady rush of new beers landing in fridges each week. The Myaree crew play their part in it too, adding twice-monthly additions to the boundless nouveau churn, but perhaps there’s as much presence in the name as the liquid in this case.

Head brewer Rhys Lopez describes this year’s lupulin impact as “hops four ways”, with T90, LupoMax, Incognito and Supercritical CO2 hop extract all onstage, derived from a trio of US hops. Among them, despite sounding like Marvel understudies, members of a yet-to-be-formed SoundCloud trap troupe, or the assumed names of these Otherside acolytes, there is one headliner amongst them: Strata. Its influence here is passionfruit, pine and pot, with the rest reverberating stone fruit and tropical tones through a juicy West Coast mid-palate that flips dry, elevating bitterness seemingly beyond its listed 66 IBU.

Available in limited release from the Myaree brewery