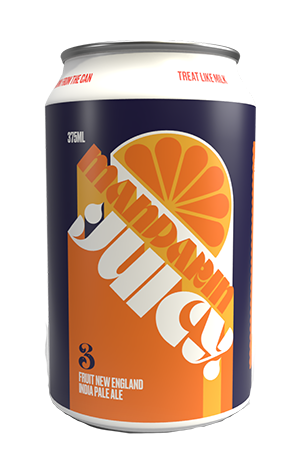 If Mark Twain were alive today, he’d no doubt have something clever to say about the frequency and variety of Juicy offshoots 3 Ravens have released since their original was first brewed back in 2016. Unfortunately, since he’s long gone, we either have to somehow fit one of his unrelated quotes in here, or I have to attempt my own, so let’s go with Twain’s kind of workable: "Why not go out on a limb? That's where all the fruit is."

The latest fruited hazy from 3 Ravens is Mandarin Juicy, where along with some of the most citrusy of hops – Cascade, Centennial Cryo, Eclipse and Mandarina Bavaria – mandarin zest and juice were added too. The resulting beer is one where there are all the hallmarks of a Juicy: a fluffy mouthfeel, fruity yeast notes and citrus, but there's also a very clear amount of zest to it. Did you ever squirt a bit of mandarin peel in someone’s eye during recess while in school? Then you might not know the exact flavour I’m talking about and, on reflection, may well owe someone apologies for your schoolyard bullying. But, if you were on the receiving end of such a hit, you undoubtedly know the exact flavour I’m talking about.

As an aside, still available from the brewery and some bottleshops is the triple dry-hopped and 7.6 percent ABV Very Juicy as well as a beer designed by the women of 3 Ravens to showcase the 2021 Pink Boots Society hop blend, their red rye IPA Freya.