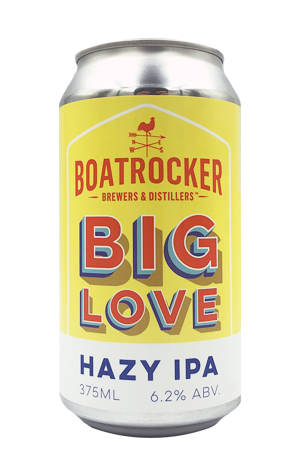 Big Love was the name under which a pale ale and sessionable red from Boatrocker appeared for a short while a few years back. And now it's been brought back, this time for a rather bigger beer and one the Braeside brewers hope will garner enough love to be a year round offering.

If you've been following the progress of Boatrocker over the past year or so, perhaps the standout has been the way in which they've added a series of top notch IPAs to their other, better known qualities. Among them have been a few well-received hazies – Nexus and Dank & Juicy, for example – and Big Love sits in that realm, closer to the latter than the former.

It pours with a peachy-orange haze and the aromas follow suit: stonefruit, orange citrus and some candy sweetness in there too. Soft and creamy on the palate, it serves up textural ripe fruit flavours and leans sweeter more than bitter, making for a very easy-going juicy IPA.