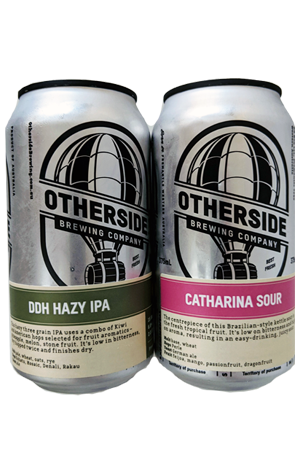 If there was ever a chance to release a beer of the moment, this is it. As 2019 ebbs towards a new decade, the density of haze surrounding most drinkers is only increasing so, in an accidentally anarchic response, this limited release is actually relatively clear. The DDH Hazy IPA wasn’t supposed to be; however, the Otherside team happily owned the moment of unexpected clarity and released it anyway as a reminder that visuals are but one of many elements of experience. Kohatu, Mosaic, Denali and Rakau hops deliver a modern hop profile of bright NZ characters with fruity melon, peach and tropical notes on a clean yet juicy base and a late, hop-derived chalkiness.

The Catharina Sour style originates from Brazil where locals infuse a full strength, low bitterness, wheat-based, kettle-sour beer with fresh tropical fruit – there may be greater variation than this but that’s the basics. Here, Otherside have used feijoa, mango, passionfruit and dragonfruit to deliver a sherbety, feijoa-led tropical perfume that runs very juicy on the palate; it's almost a breakfast juice version of candy bracelet links in beer form with soft acidity. Intriguing stuff!