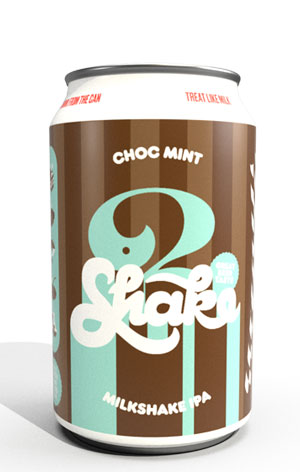 The Shake series from 3 Ravens – one that started under the Juicy banner with the Moussey Juicy GABS beer in 2018 – has a new member. And, following Salted Caramel and Coffee & Blueberry, the brewers tell us this one is a return of sorts to the original, albeit with a few twists and turns along the way.

As is their wont, there’s a fair bit at play, with the "Choc" side of things created via a combination of speciality malts and heaps of Dutch cocoa, and the "Mint" coming from the use of mint and Perle hops. Add in lactose and vanilla for added creaminess – not to mention Sabro hops, which can impart the sort of vanillin character obtained from American oak – and you've got one heck of an ingredients list.

For all the additions, the beer’s not as sweet as you might expect – like its Coffee & Blueberry predecessor, it's smooth rather than rich or chewy. The mint is tucked in subtly alongside the creamy chocolate with a little hoppy fruitiness completing the picture.

Being canned on July 1