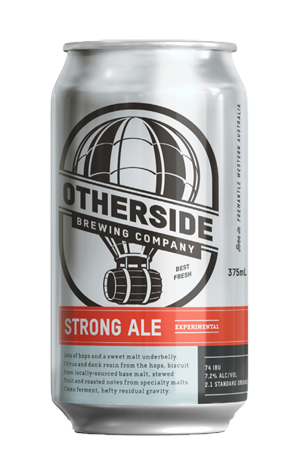 Strong ale isn’t a style seen too often these days, perhaps unsurprising when the US led push for bigger, more bitter and more aggressive beers has had such an impact globally that there are plenty of other beers that sit at or above the 7.5 percent ABV mark where you might expect to find one. In some ways, they could be considered a mid-strength or session barleywine, with English examples typically pushing the malt balance and America’s take asserting hop arrogance.

The first Experimental Series canned release from Otherside was designed as a homage of sorts to the latter – to the big, hoppy styles that have come out of the country's Northwest – yet it sits somewhere in the middle. The chewy, soft caramel characters that are created from a relatively simple malt bill are filled out to create an almost juicy character by some modern water chemistry alchemy. Citra, Amarillo and Mosaic hops provide a persuasive citrus appeal, although neither malt nor hops are particularly dominant, nor is the suggested 74 IBUs.

The overall effect is one of cohesion and drinkability – something that’s become a hallmark of Rhys Lopez’s Otherside beers.

Available from the brewery and select WA retailers and venues