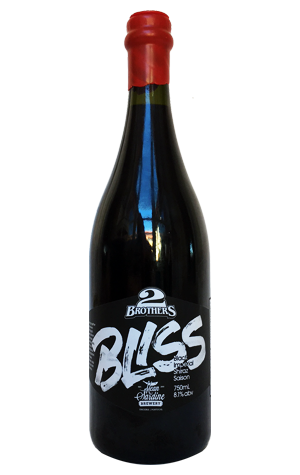 Over the eight years of The Crafty Pint, we've written about all manner of international collaborations and even played a role in one or two. But in all that time and across all those beers this is the first time we've come across an Aussie brewer getting it on with one from Portugal.

It came about through the Man of Mystery behind the Great Northern, Al Carragher, the mutual connection between 2 Brothers in Moorabbin and Mean Sardine in Ericeira. Once connected, the two parties looked to conjure a beer that would capture a little of both countries and breweries in a beer. The Portuguese brewery is known for saisons infused with light wines; 2 Brothers has delivered many a dark and hearty beer over the years. Ultimately, they landed upon BLISS – BLack Imperial Shiraz Saison – in which they combined those elements while also switching in a bold Aussie wine from Stefani Estate in place of a lighter offering.

The resultant beer – packaged in wine like, wax sealed bottles – is one that highlights the persistence that saison yeast strains can possess; despite everything going on around it, bury your nose in the glass and its esters still poke through, a little fruity, a little spicy and a little banana like. Taken as a whole, it's soft and smooth, pillowy even, with plenty of chocolate at play and scant suggestion of its hefty 8.1 percent ABV.